Southern Miss stumbles in quest to win the West 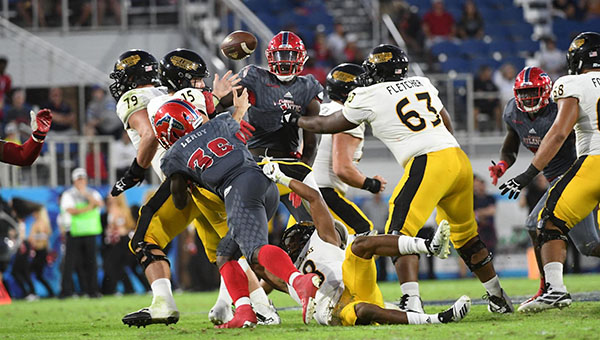 BOCA RATON, Fla. (AP) — Southern Miss played the biggest role in determining who will play for the Conference USA championship, but the Golden Eagles will not enjoy the fruits of their labor.

Louisiana Tech was also in the mix in the West. It beat UTSA 41-27 and would have likely won a three-way tie, but it lost a head-to-head tiebreaker with UAB.

Robison had 156 yards passing for the Owls. BJ Emmons ran for 71 yards and a score. Harrison Bryant had 75 yards receiving and caught three touchdown passes.

Southern Miss quarterback Jack Abraham threw four interceptions, was sacked three times, and the Golden Eagles also lost a fumble. They finished with only 258 yards of total offense and were 4-for-15 on third down conversions.

Abraham finished 25-of-39 passing for 182 yards. He also ran for a touchdown.

“When you get five turnovers on defense, two more fourth-down stops, you’re going to win a lot of games,” FAU coach Lane Kiffin said. “We’re number one in the country in turnovers and number one in the country in turnover margin. I’m proud of these players, two of three years to win the division, now to have the conference championship at home, it’s a good spot to be in.”

Vladimir Rivas scored for the Owls with a 40-yard field goal with 8:07 left in the first quarter. Robison followed up with a pair of touchdown passes to Bryant, of 38 and 15 yards, and FAU led 17-0 early in the second quarter.

Akileis Leroy picked off Abraham on the Golden Eagles’ first play of the second half and returned it 24 yards to the 3-yard line, setting up Emmons’ touchdown run and a 24-10 lead for the Owls.

Meiko Dotson also had two interceptions, giving him a school-record eight for the season.