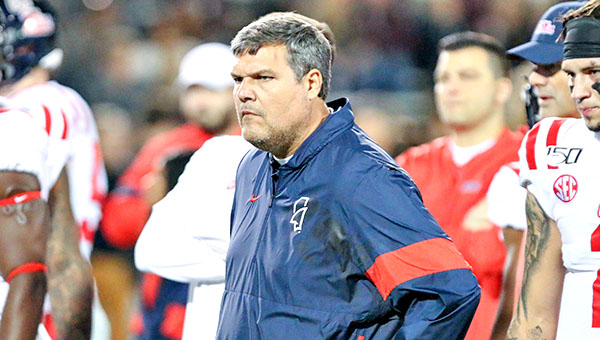 Ole Miss football head coach was fired by the unviersity on Sunday, according to multiple media reports. (Walter Frazier/For The Vicksburg Post)

Luke, an Ole Miss alum and longtime assistant, was 15-21 in three seasons as the head coach. He led the Rebels to a 4-7 finish this season that was capped by a 21-20 loss to Mississippi State in the Egg Bowl.

Ole Miss made an official announcement at 8 p.m., about an hour after several media outlets started reporting the news.

Ole Miss athletic director Keith Carter will hold a news conference Monday at 11 a.m. It will be broadcast live on SEC Network+ (on the ESPN app), OleMissSports.com, and @OleMissSports on Twitter.

“After evaluating the overall trajectory of our football program, we did not see enough momentum on the field and determined a change is necessary in order for our student-athletes to compete at the highest level,” Carter said in a statement released Sunday. “While improvements were evident in certain aspects of the program, we are judged ultimately by our record, and, unfortunately, we did not meet the standard of success that we expect from our program. We will always be grateful to Coach Luke for his leadership, particularly from a recruiting, academic and overall culture standpoint. At the same time, winning is important, and we know that we can compete for championships at Ole Miss.”

CBS Sports reported that an unidentified Ole Miss assistant coach said the coaching staff was called off the road from recruiting trips.

Another report said Luke was on a home visit to a recruit when he got the news.

Luke is a Gulfport native who played center for Ole Miss from 1995-98. He later spent 11 seasons over two different stints as an assistant coach at his alma mater.

Luke took over as Ole Miss’ interim head coach just before the start of the 2017 season after Hugh Freeze resigned. He led the Rebels to a 6-6 season that year and was given the job on a permanent basis in November 2017.

The Rebels went 5-7 in 2018 as they dealt with the effects of NCAA sanctions stemming from numerous violations committed under Freeze.

With the sanctions lifted, hopes were high for this season. Instead the Rebels floundered to a 4-7 record, went 2-6 in the Southeastern Conference, and did not qualify for a bowl game.

Five of their seven losses came by seven points or less.

In the season finale Thursday night, the Rebels rallied against Mississippi State to score a touchdown with four seconds left. Wide receiver Elijah Moore then celebrated by crawling on all fours and lifting his leg to simulate urinating like a dog to celebrate.

The incident received plenty of ridicule from national media. Luke also received criticism from fans who said Moore’s antics showed a lack of discipline that reflected on the coaching staff.

Both the school and Moore issued public apologies for the incident on Friday.

Luke is the third SEC coach that has been fired this season, joining Arkansas’ Chad Morris and Missouri’s Barry Odom.

“I want to thank Coach Luke for his devotion to Ole Miss,” Carter said in his statement. “His integrity, class and dedication to this program and our student-athletes is unsurpassed, and we will always appreciate how he stepped up at a time when his university needed him the most. We wish him the very best, and he will always be a cherished member of the Ole Miss family.”