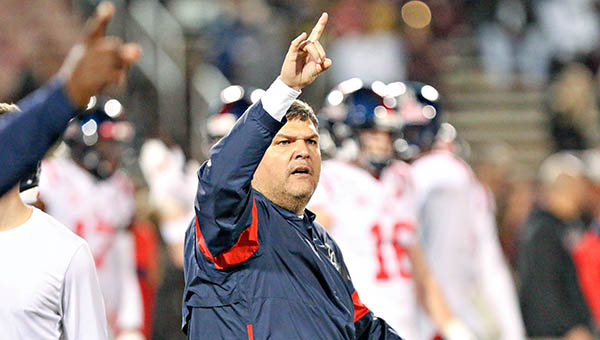 Matt Luke was fired as Ole Miss’ head coach on Sunday, ending a three-year run with the program in which he compiled a 15-21 record. (Walter Frazier/For The Vicksburg Post)

OXFORD — Keith Carter stood in the Burns Team Meeting Room on the Ole Miss campus on Nov. 22, and said Matt Luke was the future of the university’s football program.

The newly-named leader of the school’s athletics programs stood in the same spot 11 days later and formally announced Luke’s firing as the Rebels’ head coach.

Luke was fired on Sunday night, ending a three-year run as head coach. Carter held a news conference Monday morning to discuss the reasons for the dismissal and the road ahead.

Luke did not attend the news conference and has not commented publicly on his firing. He was reportedly at an in-home recruiting visit when he got the news Sunday night.

In the summer of 2017, Luke was named the interim head coach following the departure of Hugh Freeze. At the conclusion of the 2017 season Luke was hired as the permanent coach. 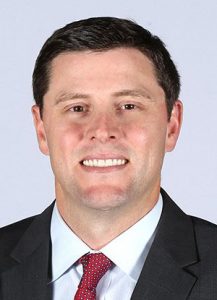 It was a tumultuous run for Luke, going 15-21 over those three seasons and finishing with a record of 6-18 in Southeastern Conference play.

Following the Rebels’ loss to Mississippi State in Starkville on Thanksgiving night, Carter said he spent the weekend mulling over the state of the football program and Luke’s time as its leader.

“With the support and consultation with Chancellor (Glenn) Boyce, and after meeting with Coach Luke, we felt that we needed to move forward and inject new energy into the program,” Carter said Monday. “Following Thursday’s game, I spent a couple of days taking a hard look at the totality of Matt’s tenure as head coach. While you can see progress in some areas, we’re not seeing enough success on the field.”

Carter elaborated that he tried to get away from the Egg Bowl loss and evaluate all three seasons. He stated that the “apathy around the program and lack of support” would be too much to overcome in year four of Luke’s tenure.

Next season, Ole Miss’s first five games include a neutral-site game against Baylor in Houston, and home games against Auburn and Alabama with a trip to Baton Rouge to take on LSU sandwiched in between.

“Going into next year with the schedule kind of built the way that it is, it just didn’t feel like that even if we got to five or six or seven wins that it was going to be enough to get people back and get over that hump,” Carter said.

Defensive coordinator Mike MacIntyre will take over as the interim head coach, overseeing all duties as well as helping coordinate recruiting with Associate AD for Player Personnel Tyler Siskey. Ole Miss has a little over two weeks to get assistant coaches in recruits’ living rooms, with early National Signing Day coming on Dec. 18.

The search for Luke’s successor has already begun and Carter said he will handle the interviews himself. He will use the same process that was used in hiring Ole Miss men’s basketball coach Kermit Davis, using Chad Chatlos of Venture Partners to help with the search.

A time frame for naming Ole Miss’s sixth head coach since 2000 wasn’t outlined during the press conference, but Carter said it would happen “quickly.”

“We’ve got to find a head coach who can walk into a room, and absolutely take over that room and galvanize people, bring them back,” Carter said. “I think people want to support, they want to come back, they want to come to Ole Miss football games, but we just lost some of that luster.

“I think bringing someone in who has energy, who can walk in and kind of own a room and be charismatic and make sure they’re talking about the future and vision of Ole Miss football, I think we can get people back quickly.”

Carter is using the Ventura Partners search firm, which also assisted in the Davis hire. Carter said he would prefer a sitting head coach or a Power Five coordinator but would remain open-minded in finding the best overall fit.

“We are going to work very quickly,” Carter said. “We will be efficient. When it comes to sitting down with candidates, it will just be me. We will be very competitive. We will go out and find the best head coach for us and we will do what we need to do financially to get that coach.”

This year’s edition of the Egg Bowl was one of the more talked about endings to a college football game in recent memory. After scoring a touchdown with four seconds left and the potential to give the Rebels the lead or a tie to force overtime, Elijah Moore mimicked D.K. Metcalf’s 2017 celebration of hiking his leg to imitate a dog urinating. That ensuing 15-yard unsportsmanlike conduct penalty led to Luke Logan missing a 35-yard extra-point try and giving Mississippi State the 21-20 win.

On Monday, Carter stated Moore’s celebration and its fallout was not a root cause of Luke’s dismissal, and continued to double down on the total resume of his tenure at Ole Miss as the reason.

“I don’t think, specifically, that incident (led to Luke’s firing),” Carter said. “I think as you look at the wins and losses on the field, that was one of the main things. The way the game ended on Thursday it was a little bit of an exclamation point on some of the apathy that was out there already and maybe put some people on the other side of that that maybe we couldn’t get back.”

On Sunday night, Carter met with the team to inform them of his decision to relieve Luke of his duties. Several players walked out during Carter’s address, which he said he would have put at around “eight or nine players.”

Many spoke to media members waiting outside the team meeting room, voicing their displeasure. One was quarterback John Rhys Plumlee, who expressed his feelings on the matter. Plumlee was coming back from his hometown of Hattiesburg and missed the team meeting, but Carter spoke with him privately.

Some players took to social media following the news, including sophomore defensive back Keidron Smith.

“Y’all wanna make a decision like this without letting us players know … Better make the right choice for who is going to be the next head coach or y’all really gone be upset as a fan base !!” Smith tweeted on Sunday night.

Carter said he was not going to hold anything against the players who walked out of the meeting, acknowledging emotions were running high on Sunday. He said some players reached out to him a couple hours afterward and apologized.

“They loved Coach Luke. We all love coach Luke and I totally understand the emotions,” Carter said. “I remember when I was 18, 19, 20 years old and emotions can sometimes get the best of you. We’re going to do everything we can to support those guys.”