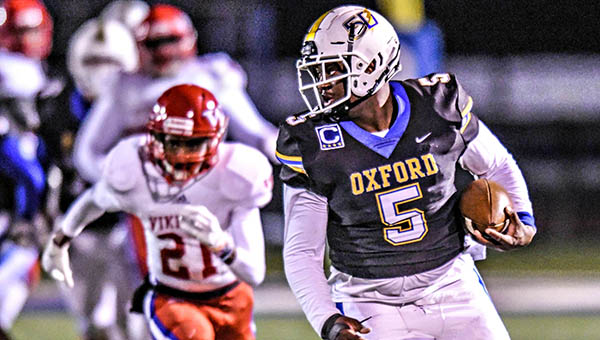 Oxford’s J.J. Pegues breaks free to score against Warren Central in a Class 6A playoff game in November. Oxford beat Starkville 25-16 on Friday to advance to the Class 6A championship game against Oak Grove. (Bruce Newman/The Oxford Eagle)

The matchups for the Mississippi High School Activities Association’s championship round have been set, and once again parity reigns — sort of — across the land.

Only two of last year’s state champions, Nanih Waiya in Class 1A and West Point in Class 5A, will have a chance to repeat. There are plenty of familiar faces heading to Hattiesburg for the championship games, however.

Oak Grove is making its fifth championship game appearance in 11 seasons, but its only victory came in 2013. Oxford is in its first Class 6A final, but made it to three consecutive Class 5A championship games without winning any from 2013-15. The Chargers moved up to 6A in 2017.

Picayune is one of only two undefeated teams left in Mississippi, along with North Side (14-0) in Class 2A. North Side, led by former Vicksburg High head coach Tavares Johnson, will try to win a title in only its second year of existence when it takes on Taylorsville (14-1) on Saturday afternoon.

And, in Class 4A, Poplarville (9-5) is in the championship game for the third time in four seasons as it faces Corinth (13-1). Corinth is in the finals for the first time since 2001, and just the second time in school history.

The MHSAA championship games are scheduled for Friday and Saturday at M.M. Roberts Stadium on the campus of Southern Miss.

The New Orleans Saints won their third consecutive NFC South championship and became the first NFL team to clinch a playoff berth by defeating the Atlanta Falcons 26-18 on Thanksgiving night.

The Saints, though, had to sweat out the final few minutes after the Falcons recovered two onside kicks — as well as a third that was negated by a penalty. The Falcons converted the first recovery into a field goal, and had a chance to tie the game after the second but the Saints’ defense bowed up to get a stop.

The two successful onside kicks, though, were a bizarre occurrence in the NFL — but not for the Saints.

Rule changes for the play designed to limit collisions also drastically reduced the chances of recovering a kick. Only 10 of 92 attempts have been recovered since the new rules were introduced before the 2018 season. Three of those recoveries came this season against the Saints.

The Chicago Bears recovered one in Week 7, and the Falcons got two. Similar to Thursday’s game, the Bears also recovered another kick after it deflected off a Saints player, but Chicago’s Ben Braunecker was ruled to have stepped out of bounds before coming back in and falling on the loose ball and the Saints kept the ball.

Field goals played a big part in Auburn’s 48-45 win over Alabama in the Iron Bowl on Saturday. First, Auburn’s Anders Carlson made a 52-yard kick to end the first half after a replay review put one second back on the clock. Then, Alabama’s Joseph Bulovas missed a 30-yarder that would have tied the game with two minutes remaining.

Carlson went 4-for-4 on field goal attempts — all from 43 yards or longer — to make opponents a perfect 17-for-17 against the Crimson Tide this season. The 17 made field goals are tied for the second-most allowed in the FBS.

Bulovas’ miss, meanwhile, was Alabama’s 101st since Nick Saban took over as head coach in 2007. That is the most in the FBS according to ESPN Stats & Info.

Alabama’s kickers, Bulovas and Will Reichard, are 12-for-18 this season. Three of the misses have come from inside 40 yards. They’ve also missed three extra points.

4
College football bowl assignments will not be announced until Sunday, after the conference championship games have been completed and the four teams for the College Football Playoff have been selected.

Mississippi State and Southern Miss will both be heading to bowls, however, and Alcorn State can join them by beating Southern University in the Southwestern Athletic Conference championship game on Saturday.

Mississippi State (6-6) has the worst record of the nine Southeastern Conference teams that are bowl-eligible. There is no set criteria for which SEC-affiliated bowls have to pick which teams, but it seems a certainty that Mississippi State would be at the bottom of the list. That would put it in line for either the Texas Bowl in Houston, the Belk Bowl in Charlotte, or the Liberty Bowl in Memphis, which are the last three to choose from the available pool of teams.

The Bulldogs could get a bump up in the selection order if two SEC teams are picked for the Playoff. LSU and Georgia, ranked Nos. 2 and 4, respectively, in the CFP rankings, play for the SEC championship Saturday in Atlanta.

Conference USA has no set selection order for its six bowl tie-ins, and there are seven bowl-eligible teams in the league. Charlotte selected an invitation from the Bahamas Bowl on Sunday, leaving six teams to fill five guaranteed spots.

Southern Miss (7-4) was snubbed for a bowl last season, but it doesn’t appear likely to happen again.

Conference USA also has agreements with the Independence Bowl in Shreveport and the Boca Raton (Fla.) Bowl if the SEC or Atlantic Coast Conference do not have teams to play there. Since the SEC only has nine bowl-eligible teams before the Independence Bowl picks its matchup, Southern Miss should have a landing spot even if it’s the odd man out in the initial round of bowl selections.