Alcorn State softball to play tournament in Vicksburg in February 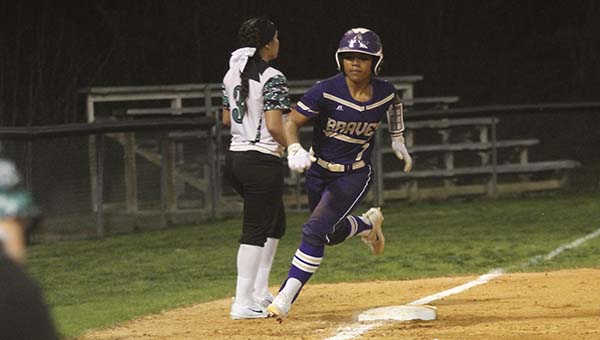 Alcorn State's Alicia Hill (7) rounds third base to score against Kentucky State during a game played at Vicksburg High School in 2018. After three years of playing single games in Vicksburg, Alcorn will host a seven-team weekend tournament in the city in February 2020. (Courtland Wells/The Vicksburg Post)

Ever since he started bringing his team to Vicksburg for an early-season game each season, Alcorn State softball coach Josef Rankin has wanted to make it a bigger deal.
Come February, he will.

Alcorn will play six games in a three-day span in the River City, and bring six other teams along with it when it hosts the Vicksburg Tournament Feb. 14-16 at Sports Force Parks on the Mississippi.

It’ll be the fourth year in a row that Alcorn has played a game in Vicksburg, but the first time it has hosted a multiple-team event. From 2017-19 the Lady Braves played a doubleheader against Kentucky State at Vicksburg High School’s field.

“We just got with (Vicksburg softball coach Brian) Ellis and he mentioned the Sports Force facility. And then we talked to Jackson State’s coach and he got interested. We got together and put it together,” Rankin said. “It’s an opportunity within the community. It’s one thing to play in Lorman. This is an opportunity to play there, and Vicksburg has done a great job supporting us.”

Games will begin on the afternoon of Friday, Feb. 14, and continue through Sunday. The tournament will follow a round-robin format, with teams playing each other once or twice.
Rankin said it was a chance for all of the teams to cram in a bunch of games before conference play begins.

“That’s mostly what the month of February is, is going to tournaments. It’s a chance to get as many innings in as you can,” Rankin said.

With the move to Sports Force, which can host multiple games at once, Rankin said the opportunity exists to expand the tournament beyond seven teams in the future.

“The people at Sports Force mentioned they have some colleges up north that are looking at coming down for a tournament. They can’t play up there because of the weather,” Rankin said. “Hopefully it can become a little bigger deal. We want to get a few more teams from our conference in the SWAC involved and make it a bigger deal.”