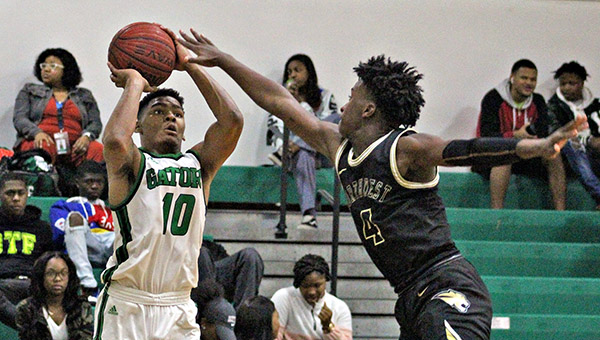 A little rest and relaxation did the Vicksburg Gators a world of good.

“Since (last) Monday we’ve had extreme practices every day but Thanksgiving. We’ve had good spirits and we’re working hard. We’ve still got a ways to go. You don’t want to lose games, but losing is good because now you’ve got something to work on,” Vicksburg coach Kelvin Carter said.

The lopsided victory over Northwest Rankin (6-4) also gave the Gators (6-3) a nice bounce heading into Saturday’s rivalry showdown with Warren Central. They’ve lost seven of the last nine meetings with the Vikings since 2014, after winning 19 in a row between 2006 and 2014.
The varsity boys game begins Saturday at 2:30 p.m. at Warren Central.

“All I can say is, it’s a good win going into Warren Central because Warren Central is tough. We’ve just got to go play ball. They’re playing some ball on (Highway) 27,” Carter said. “I’ve been part of this thing since 1987. The juices are flowing when you play Warren Central. It’s always an exciting game. I just hope we can leave it all on the floor and come out with a win.”

The win against Northwest Rankin was a quality one in every respect for the Gators. They hit eight 3-pointers in the first half — all of them by Jackson, Butler and Taylon Smith — to build a 42-31 lead.

Jackson was responsible for all eight points during an 8-0 run late in the second quarter. He hit a 3-pointer, then stole the ball in the backcourt and went in for a layup. After a Northwest Rankin miss, he kicked the ball out to Butler for a 3-pointer that put Vicksburg ahead 37-23 with 2:47 left.

Jackson hit three 3-pointers and scored 15 of his game-high 23 points in the first half. It was the seventh time in nine games this season that the senior guard has scored in double figures. He reached that mark once in his first two varsity seasons.

“He had his best game of the season,” Carter said of Jackson. “When he’s playing downhill, he’s pretty tough. He’s a strong kid.”

Jackson also had a three-point play in the third quarter to spur a 13-0 run that blew the game open. A 3-pointer by Smith capped it off and gave the Gators a 61-35 lead with 2 ½ minutes to go.

Northwest Rankin got its deficit down to 14, at 65-51, with a little over four minutes left in the fourth quarter but never got closer than the final 13-point margin.

Colby Bilbro led Northwest Rankin with 18 points — 12 of them in the fourth quarter — and five rebounds. Matthew Mackey added nine points and Brannon Singletary had seven.

“(Northwest Rankin) is not a bad team. They beat Clinton by 18. Sometimes when you just jump on a team and get that momentum going and keep it going, you can come out with a win. Pretty much, that’s what happened tonight,” Carter said. “The team defense that first three or four minutes of the third quarter was important. When we went up 20, I felt a little comfortable. We got a little lax at the end, but overall I appreciated the effort.”

The Vikings fell behind by 10 points in the first quarter, and trailed 31-25 at halftime. Bowman, Daniel Smothers and Anthony Lumpkin combined for all of the team’s points in the third quarter, however, as they outscored Wingfield 15-8 to take the lead for good.

Lumpkin finished with 14 points and Smothers with 13.

Warren Central has won four of its last five games, and will play the next three at home beginning Thursday against Jim Hill at 6 p.m. It will also host Vicksburg on Saturday at 2:30 p.m., and Brandon on Dec. 10 at 7:30 p.m.

Trinye Brown added 11 points and Markeece Wilson had 10 for the Flashes. Carter Magee scored nine and Coleman Verhine eight, as 10 players scored in all. The Flashes opened a 13-point lead at the end of the first quarter, and extended it to 38-16 by halftime