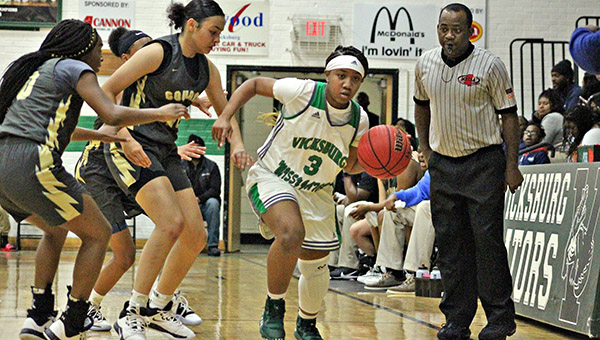 The Vicksburg Missy Gators have been running hot and cold this season, alternating some quality wins with some frustrating losses.

They’re on the right side of things for the moment, and wouldn’t mind staying that way with a big game coming up next.

“Any win is a good win. There were a lot of things in that fourth quarter we need to go work on and tighten up. I’m happy that we got a win against a formidable opponent,” Vicksburg coach Troy Stewart said.

It was the fourth game in a row where the Missy Gators (4-4) have alternated wins and losses. They also started the season with back-to-back victories followed by a three-game losing streak.
They’ll head across town on Saturday to face a red-hot Warren Central team that has beaten them six of the last seven times they’ve played, and that has won seven of its first nine games this season.

Vicksburg trailed Northwest Rankin (4-5) by eight points entering the second quarter on Tuesday, and then got hot. Sims scored nine points in the second quarter and the Missy Gators outscored the Cougars 20-5 to take the lead for good.

They never quite pulled away, though. Their biggest lead was 12 points early in the third quarter, and the margin hovered between four and nine for most of the second half.

The ball sailed out of bounds on a long outlet pass, however, and the Missy Gators escaped with the victory.

Dupree scored a game-high 22 points for Northwest Rankin, half of them in the first quarter. Serenity Trigg added nine points and Mariah Matthews seven.

Jones finished with eight points and six rebounds for Vicksburg, which shot 13-for-63 overall from the floor (21 percent) and 1-for-11 from 3-point range. It made up the difference by going 24-for-38 at the free throw line.

“Northwest Rankin made adjustments that we needed to counter, and we didn’t counter them the right way. We made some small adjustments, got in the right places, did the right things, and just couldn’t put the ball in the hole. We just never could get in a groove and pull off,” Stewart said.

Sanders scored 14 points in the first half as the Lady Vikes jumped out to a 44-12 halftime lead. Bracey took over from there, scoring eight points in the third quarter as they continued to pad the margin.

Jamia Brinson led Wingfield with 11 points. The Falcons posted their highest point total of the season.

Taylor Chewning and Olivia Waring added eight points apiece for the Lady Flashes, who held Tallulah to two points in the first quarter and led 28-11 at halftime.

Tuesday’s game was the last for St. Al at home in 2019. Its next five are on the road, and it will not play at home again until facing Simpson Academy on Jan. 2.