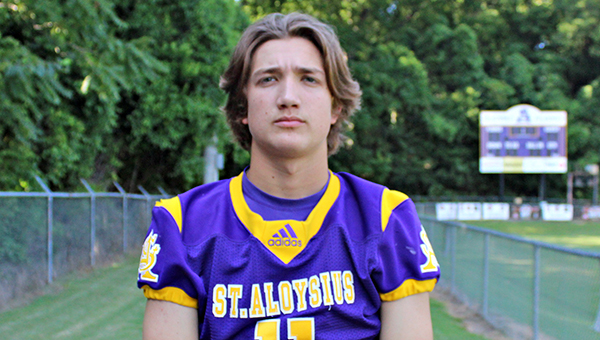 St. Aloysius soccer player Kieran Theriot had three goals and one assist in a 4-3 win over Hartfield Academy on Tuesday.

The first time St. Aloysius played Hartfield Academy, it did not go well.

The second time was much, much better.

Kieran Theriot had three goals and one assist, Cooper Madison mirrored him with one goal and three assists, and the Flashes beat Hartfield 4-3 on Tuesday in an MAIS boys’ soccer game in Flowood.

St. Al will return to action on Thursday at 4:30 p.m., when it hosts Starkville Academy at Sports Force Parks on the Mississippi.

(B) Vicksburg 2, Provine 1
Stacy Washington scored the game-winning goal with three minutes left in regulation to give Vicksburg High a victory over Provine in its Region 4-5A opener.

Christopher Williams had a goal and assisted Washington’s winner for the Gators (3-1-2, 1-0 Region 4-5A), who have won twice and tied once in their last three matches. They only won five games all of last season.

This kicked off a big stretch of three consecutive region games. The Gators will return to Jackson on Thursday to face Jim Hill, and again next Tuesday to play Callaway at South Jackson Field, located at Forest Hill High School.

The Region 4-5A teams will play the second half of their round robin schedule in January.

(B) Warren Central 6, Murrah 0
Tony King scored three goals, Brandon Gilliam had a goal and an assist, and Warren Central had little trouble idefeating Murrah in its Region 4-6A opener on Tuesday.

The Vikings will take a step up in competition on Friday, when they host perennial Class 6A state power Northwest Rankin at 7:15 p.m.

McKenna Elder and Kennedy Mullins added two goals and one assist apiece for the Missy Gators (5-1, 1-0 Region 4-5A), and keeper Rosemarie Thuha made six saves to earn the shutout.
Vicksburg won its third game in a row.

Abby Claire Fuller added a goal and an assist in the win over Murrah, while Natalie Greer and Sarah Prescott scored one goal each. Polk, Maddie Watkins, Aryn Greer and Jayda Griffin each had one assist.

The Lady Vikes will host Northwest Rankin Friday at 5:30 p.m.