Flashes pick up a victory over Starkville Academy 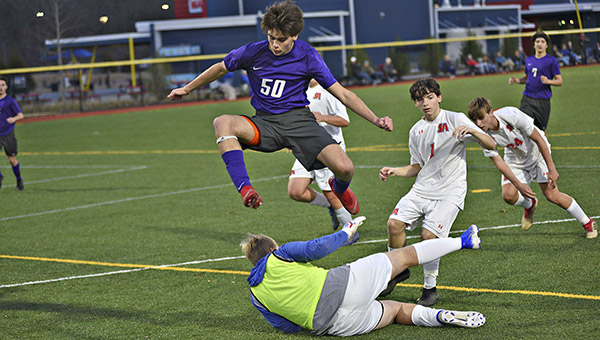 St. Aloysius’ performance Thursday against Starkville Academy wasn’t perfect. It missed some easy shots and didn’t put the game away early when it had the chance.

In terms of fighting through that ugliness and walking away smiling, though, it more than served its purpose.

Cooper Madison scored on a breakaway in the first half, and Kieran Theriot capped things off with a penalty kick late in the second as St. Al defeated Starkville Academy 2-0 at Sports Force Parks on the Mississippi.

It was the second win in three days for the Flashes (4-2), who will now have a week off before their district opener Dec. 12 at home against Pillow Academy.

“We played Hartfield two nights ago, and that was a real emotional and physically demanding team. They played the ball around a lot and ran us around a good bit, and we did well against that,” St. Al coach Jay Madison said. “(Starkville) has a solid team. We didn’t help ourselves by missing some of the penalty kicks that we had. We could have settled things a little earlier. But I’m proud for them. We’re going to give them a little break and get back into it next week.”

Both teams spent most of the first half misfiring on golden opportunities to score. Theriot rocketed a penalty kick high over the goal in the 18th minute, and Reed Bourne was stopped by Starkville keeper Charlie Cox on another penalty kick in the 40th.

Starkville (1-1), meanwhile, failed to score after getting a free kick at the top of the box, and a 2-on-1 breakaway in the 25th minute resulted in a shot high over the net.

The one successful conversion came from Cooper Madison. He took the ball just on the positive side of midfield, dribbled about 40 yards up the left sideline and through traffic, and then sent a shot across the face of the goal. He beat Cox low and to the right side for the goal and a 1-0 lead in the 33rd minute.

“I just took off. I dribbled through a couple of guys and saw an opening. I saw that guy was pushed back a little bit, so I took a shot early and ended up getting it in,” Cooper Madison said.

The second half was more of a mundane defensive affair. Cox and his St. Al counterpart Haden Luke each made some solid plays — both keepers finished with five saves — but otherwise it was the defenses settling in and limiting chances.

In the final minute of regulation, Cooper Madison was fouled in the right corner of the box to set up one final chance at a penalty kick. Theriot took it, and blasted it into the right side of the net for a 2-0 lead and an emphatic exclamation point.

“We missed a couple of opportunities. We should have had a couple of other goals. But it was a good game to win,” Cooper Madison said.