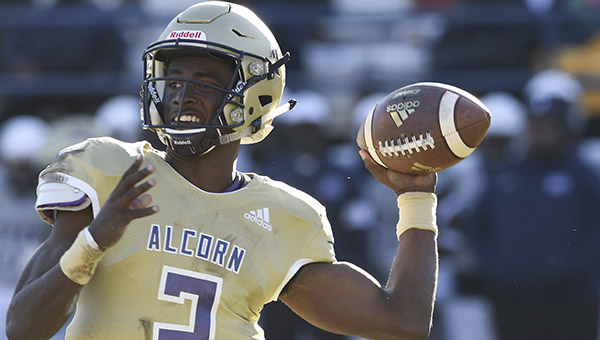 Alcorn State quarterback Felix Harper (2) drops back to pass. Harper was selected as the SWAC Offensive Player of the Year, and will lead the Braves into the conference championship game against Southern University Saturday afternoon in Lorman. (Courtland Wells/The Vicksburg Post)

LORMAN — Two years ago, when he was first settling in as Alcorn State’s quarterbacks coach, Pat White caught a glimpse of Felix Harper and saw the future.

“When I showed up on campus two springs ago, I saw Felix warm up for the first time and I said, ‘He’s the guy,” White recalled.

It took a while to get there, but the future is here.

Harper capped a breakthrough season, his first as Alcorn’s starting quarterback, by winning the Southwestern Athletic Conference Offense Player of the Year award on Wednesday. It was the latest milestone in a meteoric rise for the junior from Fairburn, Georgia. He started the season as the backup QB, stepped in when Noah Johnson suffered a season-ending shoulder injury, and never looked back.

Harper ranked second in the SWAC in passing yards, and led the Braves (8-3) to their sixth consecutive East Division championship. They’ll host Southern University in the conference championship game Saturday afternoon in Lorman.

“It’s a blessing. I just thank the coaches for allowing me to play here at this university. I also thank my teammates because without them I wouldn’t be here. We all work together day in and day out to get the job done and hopefully we’ll be able to pull it out this weekend,” Harper said.

Harper’s rise continued an odd trend among Alcorn quarterbacks. It’s the fourth time in the team’s six-year reign as East Division champs that a senior starting quarterback was injured during the season, and his replacement excelled.

Johnson stepped in during the 2017 season for Lenorris Footman and went on to win the SWAC Player of the Year award in 2018. Footman had replaced John Gibbs in a similar situation in 2015. This time, it was Harper who stepped up when Johnson was injured in Week 3 against McNeese State.

“Coaches always say, ‘Next man up.’ You never know what will happen,” Harper said. “So we always take it very seriously during practice, to be the next man up and to be well prepared for when your time comes.”

Harper wound up passing for 2,387 yards, with 29 touchdowns and only five interceptions this season. He had at least 250 passing yards and multiple touchdowns seven times each in eight games.

“The biggest thing with him is he’s always willing to get things right in the course of practice,” Alcorn head coach Fred McNair said. “If he messes up something he wants to do it again and get it right. His leadership ability has really grown. He’s matured. And this is only his junior year, so we’re excited about him and the things that he’s done to lead this team to where he is now.”

Harper’s play earned praise from his teammates as well — especially and not surprisingly from a receiver corps that he has made quite happy.

Eight players have caught at least 10 passes this season. LeCharles Pringle, Chris Blair and Juan Anthony, Jr., all have more than 30 receptions each, and all three of them have surpassed their yardage totals from 2018 as well.

Blair said some of the increased production from the receivers comes from Harper’s willingness to stay in the pocket and throw. Johnson ran 144 times for 1,187 yards in 2018, which ranked fourth in the SWAC. Harper only has 52 carries for 154 yards this season.

Blair said Harper has done a good job of spreading the ball around.

“Felix does a great job of keeping his eyes downfield. Noah was a great quarterback as well. Felix is more of a pass-first guy. Noah, if he doesn’t see it right off he’ll take it and run and still do something with it,” Blair said. “It’s a great thing to see all of our receivers touching the ball each game. Going from last year, where maybe two or three receivers touched the ball, to now you’ve got six or seven that’s being able to catch the ball and do something with it. Obviously, that’s a good thing.”