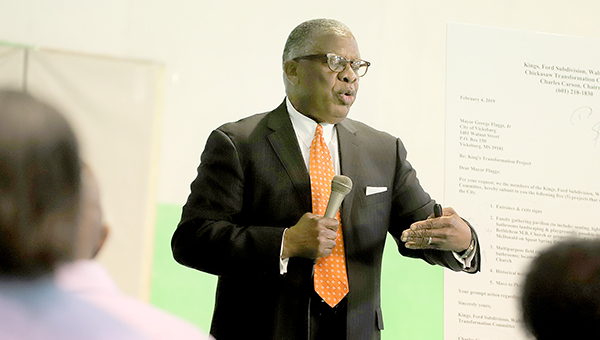 Mayor George Flaggs Jr. has named a seven-member committee to develop the design and concept for a proposed civil rights park at the former Kuhn Memorial Hospital site.

The members were named Thursday at a public meeting on the park project.

“All of them have been more than wanting to serve, and I’m just glad that these people have accepted,” Flaggs said.

Lowe-Fisher, who is committee chairman, and Logan work at the U.S. Army Engineer Research and Development Center. McMillin is the wife of the late Dr. Lamar McMillin, a retired physician.

The McMillins purchased and restored the former Fleckstein-Coccaro grocery at 1501 Martin Luther King Blvd., which was built in 1839 and is across the street from the Kuhn property.

He said he selected the committee members “because they have the expertise and the knowledge to create the criteria and look at the design. We’re talking about converting this (land) into a museum park.”

He said the committee will have the final word on the park, adding, “I don’t want this park politicized; that’s why I appointed this committee.”

The mayor proposed the park at a Nov. 25 meeting of the Board of Mayor and Alderman after the board rejected two proposals for a multi-use residential/commercial and recreation development of the property.

He said the park would have a walking trail and highlight the importance of Kuhn to the community with monuments to Kuhn and Dr. Martin Luther King, and displays showing the contributions of area residents, churches and organizations to the civil rights movement.

“We should have a monument that really depicts Dr. Martin Luther King and is fitting of him; (and) some type of statue for the Kuhn Memorial Hospital that discusses the importance of the site,” he said.

“The time has come for us to put forth an effort so our children and our children’s children can see the fruit of our efforts,” Flaggs told the 10 people attending the meeting.

He encouraged the committee members to use the Board of Mayor and Aldermen’s boardroom and “bring people in from around the country if you want to and get ideas of what they’ve got.”

He said he expected to have an architect’s rendering of a proposed plan, adding he will seek state and federal money to develop the park.

Flaggs said the park will be a tourist attraction for the area and could be a tie-in with the Mississippi Civil Rights Museum in Jackson.

With tourists coming into town, he said, “This will be one more amenity and historical stop for them.”

The idea for the park was well received, with one resident asking if the park would include kiosks offering an oral history with comments from people who participated in the civil rights movement in Vicksburg.

“I had not thought of that, but it’s a good idea,” Flaggs said.

“This does my heart good,” community activist Ernest Galloway told Flaggs. “I think the park is a great idea.”

Galloway asked Flaggs if the committee had a timetable to develop the plans for the park.

“I want to keep it (the park) in this administration,” he said. “Because the next administration will come in and chuck the ideas and we won’t have anything. We don’t want to carry it down the road.”

Flaggs said any timeline will be up to the committee. “They will decide,” he said. “All your input will go to this committee.”

Since then, the property was sold six times for taxes, and city officials tried for at least the past 10 years to get the property owner to clean and demolish or renovate the buildings on the site.

The board on July 6, 2017, put the 12.8-acre property under the city’s slum clearance ordinance in a move to step up its efforts to remove the complex’s main building.

When the parties with an interest in the property failed to present plans to either raze or renovate the buildings by September 2017, it cleared the way for the city to begin the process for demolition.

The city officially took title to the Kuhn property Nov. 1, 2017, after reaching agreements with the four parties that had interests in the property.