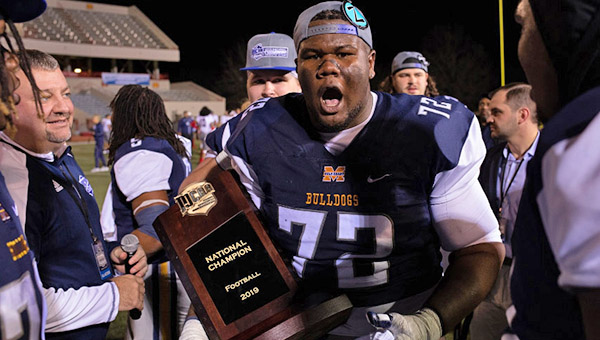 Mississippi Gulf Coast Community College offensive lineman Quincy McGee celebrates with the trophy after the Bulldogs beat Lackawanna college 24-13 in the NJCAA national championship game on Thursday. It is Gulf Coast’s fifth national title, and first since 2007. (Courtesy of the NJCAA)

PITTSBURG, Kansas — Mississippi Gulf Coast Community College’s defense ranked second in the country this season. In the end, it carried the Bulldogs all the way to No. 1.

Gulf Coast held Lackawanna College (Pa.) to 38 rushing yards, forced eight three-and-outs, and pitched a shutout in the second half as it beat the Falcons 24-13 in the NJCAA football national championship game on Thursday.

It’s the fifth national championship for Gulf Coast (12-0), and first since 2007. The Bulldogs broke Lackawanna’s 22-game winning streak and now have the longest active streak in the country at 16.

Gulf Coast’s other national titles came in 1948, 1971, 1984 and 2007.
Jack Wright became the second coach in NJCAA history to win a national championship at two different schools. He won with Northwest Mississippi in 2015. Dick Foster did it with Kansas schools Fort Scott in 1970 and Coffeyville in 1983.

“Most people around here don’t know we have an unbelievable community college. Our whole system is unbelievable — academics, athletics — and we have a lot of momentum anyway. This just accelerates that,” Wright said. “Everybody at Gulf Coast who has put so much into the program, even before I got there two years ago, deserves this. Our work was laid when I walked in the door. You’re seeing come to fruition something that was developed five or six years ago.

Lackawanna scored two touchdowns in the span of a minute late in the first half to take a 13-10 lead. Jael Negron caught an 8-yard TD pass, and then Pheldarius Payne returned a fumble 14 yards for the second score with 2:14 left.

It was Lackawanna’s ninth defensive touchdown of the year, which leads the country.

Neither team scored in the third quarter, but Gulf Coast got two touchdowns in the fourth to take the lead and then put the game away.

Two 15-yard penalties gave Gulf Coast first downs, and the Bulldogs converted a fourth-and-1 on the go-ahead drive as well. Austin Bolton finished a 13-play, 59-yard drive with a 1-yard touchdown run with 10:03 remaining to put Gulf Coast ahead 17-13.

The Bulldogs forced a three-and-out, and Deondre House scored on a 47-yard run on the next play to push it to 24-13.

Bolton led Gulf Coast with 23 carries for 70 yards and two touchdowns. House had 73 yards and one TD on only nine carries.

Gulf Coast’s defense, nicknamed “The Regulators,” put the finishing touches on the victory with interceptions on Lackawanna’s last two drives. The Bulldogs forced four turnovers — offsetting three by their own offense — and had three sacks.