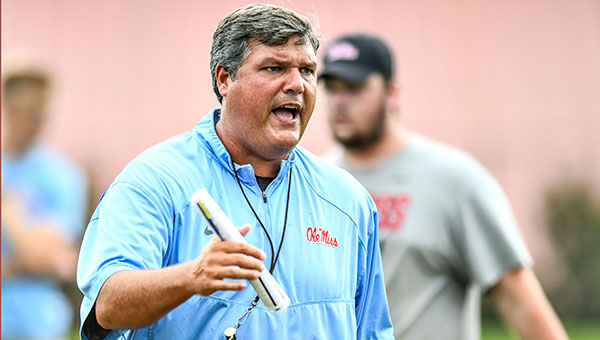 There is a scene in the classic graphic novel “Watchmen” in which the godlike Dr. Manhattan is able to see all of time and space. He witnesses not just world events, but his own personal relationships beginning and ending years before they actually do.

Every time I see a press conference introducing a college football coach at his new school, it reminds me of that scene.

Coaching is a brutal and transitory profession. Advancing up the ladder requires frequent moves to new towns or states. When they finally do get to the top and land a head coaching position, especially at the highest levels, the clock starts ticking.

Every introductory press conference is filled with flowery speeches about wanting to build something that lasts, but everyone in the room knows we’ll do this all again at some point in the next few years.

Matt Luke found this out the hard way when Ole Miss fired him last weekend.

Luke is a lifelong Rebel. He and other family members played football there, and he spent a good chunk of his career working on the staff as an assistant to several head coaches. He took on an impossible task when he became the head coach just as NCAA sanctions were levied against the program. When he didn’t win, the reward for guiding his beloved Rebels through a dark hour was a $6 million buyout and an unceremonious dismissal.

The buyout cushions the blow, certainly, but it doesn’t erase the personal tragedy for Luke. He reached the pinnacle of his profession at a place he surely loves, and now he can never work there again. Former head coaches can resurrect their careers as capable assistants, but not in the same place that fired them. The memories are too strong for them and the fan base, the shame of a demotion something that is too great to ignore.

It can be debated whether Luke deserved more time to turn Ole Miss’ football program around. If the Rebels started 1-4 next season then it probably would have happened anyway. The only certainty, and we all should have seen it coming, was that it was inevitable. It always is. In some cases, though, it’s much sadder than others.