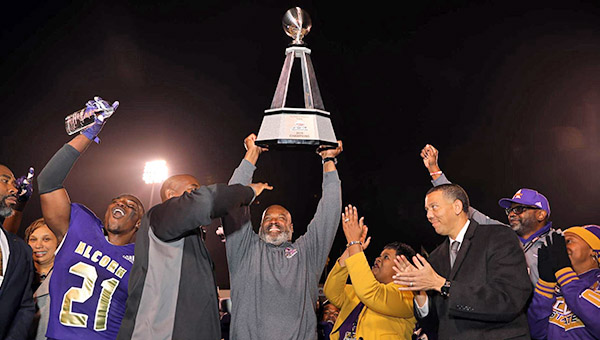 LORMAN — All throughout its six-year reign as the dominant team in the Southwestern Athletic Conference, a strong defense has been a constant for Alcorn State.
On Saturday, it helped them keep the conference championship trophy in Lorman.

Qwynnterrio Cole made a big fourth-down stop at midfield, Taurence Wilson returned an interception 53 yards with 1:23 left. and Alcorn State earned a trip to the Celebration Bowl with a 39-24 win over Southern University in the SWAC championship game.

The Braves (9-3) scored 17 unanswered points in the last five minutes to win their second straight SWAC title, and fourth in six seasons. They’ll face North Carolina A&T in the Celebration Bowl on Dec. 21 in Atlanta for the HBCU national championship.

The teams combined for 766 yards of offense, but also seven turnovers. Southern quarterback Ladarius Skelton was 18-of-30 passing for 159 yards, with no touchdowns and three interceptions. He also was sacked three times, but ran 20 times for 46 yards and two touchdowns.

Jarrod Sims added 149 rushing yards and a touchdown for the Jaguars.

Alcorn QB Felix Harper threw two interceptions and was only 12-of-25 for 226 yards and one touchdown.

Alcorn wide receiver LeCharles Pringle caught five passes for a career-high 145 yards and a touchdown, and was named the game’s MVP. He tied Alcorn’s single-season record with his 14th touchdown reception.

Southern (8-5) had only won once in its last seven trips to Jack Spinks Stadium — and once in the last 10 games overall against Alcorn — but was in a position to break those streaks when Skelton’s 8-yard TD run with 8:43 remaining in the game put it ahead 24-22.

The rest of the game, however, belonged to Alcorn.
Corey McCullough put Alcorn back in front with a 23-yard field goal with 5:07 to play, and the Braves’ defense came up big down the stretch.

On Southern’s next possession, Skelton was stopped a yard short on third-and-14. Sims was then stopped by Cole for no gain on fourth down at the Southern 48-yard line.

“It was big, they had been running that same play off-tackle and inside zone, then to the back side the whole night for big yardage so we were kind of looking for that play,” McNair said of the fourth down stop. “I thought Qwynnterrio did a great job coming in and filling it in to make that stop. Great call by (defensive coordinator Cedric) Thornton, the guys that were in position to make the play, made the play.”

After Cole’s stop, De’Shawn Waller ripped off a 31-yard run, Niko Duffey had an 11-yard run, and the Jaguars chose to let Waller score from 6 yards on the next play.

The touchdown gave the Braves a 32-24 lead with 1:57 to play, and Southern the ball back with a chance to drive for a tying touchdown and two-point conversion.
Instead, Alcorn got the clinching touchdown with its defense.

Wilson stepped in front of Skelton’s pass on first-and-10 from near midfield and took it 53 yards to the end zone. The defensive touchdown sealed Alcorn’s 17th SWAC title.

“It feels amazing. I’m just glad to be here and a part of this. I’m glad to have two rings,” Pringle said.