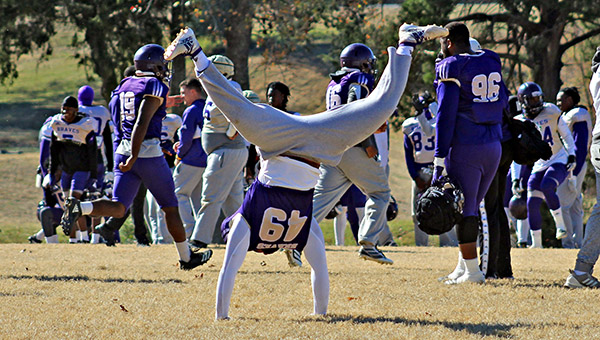 Alcorn State linebacker Solomon Muhammad (49) does a cartwheel at the end of practice on Wednesday. Alcorn will host Southern University in the SWAC championship game Saturday at 3 p.m. at Jack Spinks Stadium in Lorman. (Ernest Bowker/The Vicksburg Post)

LORMAN — Near the end of practice on Wednesday, Alcorn State defensive back Taurence Wilson intercepted a pass and returned it for a touchdown. His teammates Juwan Taylor and Allen Bruce celebrated with a chest bump, and the three of them soon joined a couple of others for a group photo.

A few minutes later, All-Southwestern Athletic Conference linebacker Solomon Muhammad did a series of cartwheels as he made his way toward the post-practice huddle.

If the Braves are feeling any pressure heading into Saturday’s SWAC championship game — and why should they, after five previous trips here — they sure weren’t showing it.

“It’s a good feeling that these guys have got,” Alcorn head coach Fred McNair said. “My thing is, if these guys have fun the way they’ve been doing all year, they’ve been taking care of business. They play with a lot of emotion and a lot of effort. When they’re having fun, they’re more loose and I can gauge how they’re feeling in the course of practice. They understand when the lights come on what they really have to do. They’re just enjoying the moment.”

The Braves (8-3) haven’t always enjoyed the moment during their six-year reign as SWAC East Division champions. They’re 3-2 in the conference championship game in that span. There’s no doubt, though, that they do understand what it means to get to this point.

Alcorn will host West Division champion Southern University (8-4) Saturday at 3 p.m. at Jack Spinks Stadium. It’s the second year in a row the teams will match up in the championship game, and is also a rematch of their game Oct. 26 in Lorman.

The winner of Saturday’s game advances to play MEAC champion North Carolina A&T in the Celebration Bowl Dec. 21 in Atlanta. The Celebration Bowl crowns the HBCU national champion.
It took Alcorn 15 years to win its first division title, but it has established a dynasty ever since.

Alcorn’s six consecutive division titles are a SWAC record. The last time Alcorn, Southern or Grambling were not involved in the championship game was 2012, when Arkansas-Pine Bluff beat Jackson State.

“Sometimes we’ll be like, ‘Man, I don’t feel like coming out here and practicing,” Alcorn senior wide receiver Chris Blair said. “But then, again, there are eight other teams that wish they could be in our shoes right now, so we have to make the best of this moment. Since this is my last year, I’m taking advantage of every opportunity I get to be on this field.”

Playing on their home field on Saturday is something the Braves are hoping to take full advantage of. They are 16-2 at Jack Spinks Stadium over the last three seasons, and have won nine in a row there.

Southern has been a frequent victim of the “Spinks Jinx.” A 41-33 decision in 2016 is the Jaguars’ only victory in seven trips to Lorman this decade. Alcorn won 27-13 when they played there in October, and 37-28 in last year’s SWAC championship game.

Having an extra day to prepare instead of travel, and having a rowdy and full stadium on their side will be a big advantage for the Braves, McNair said.

“Our fan base has been here the whole year and been supportive of us. As coaches and players we really appreciate that,” McNair said. “Any time you’re playing the SWAC championship game at home, with the fan base we have, you get kind of an edge. I think our fans will show up and do a great job cheering us on and being that 12th man for us.”

Alcorn quarterback Felix Harper threw for 277 yards and two touchdowns, and added a rushing TD in the first meeting with Southern. The Braves also held Southern’s high-powered rushing attack, the best in the SWAC, to only 75 yards.

The Jaguars averaged 226.8 rushing yards per game this season, which ranks 13th in the Football Championship Subdivision.

The first game against Southern has been part of a seven-game stretch in which Alcorn allowed less than 20 points. Alcorn allowed 212 points this season, the fewest in the SWAC and 12th-best in the FCS.

“I’m not trying to be cocky, but I really don’t like it when people score. So even 20 is too much for me,” said Muhammad, who leads the Braves with 80 tackles. “We just try to have a perfect game, and we haven’t had a perfect game yet. It’s all got to come together some week, and this is the week. It’s now or never. This is championship week. We’ve just got to come out and execute and play our best on Saturday.”