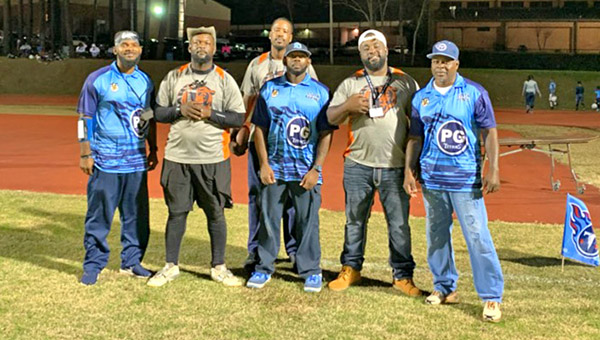 TITAN UP: Port Gibson Titans coaches Ocie Brown, Terry Barnes, Wendell Barnes, John Noble, Donald Thomas and David Jones stand together after the MYBCS Bowl on Dec. 3. The Titans, an 8U youth football team, finished with a 7-2 record this season and won the Jackson Football League championship. (Submitted to The Vicksburg Post)

Titans finish season
The Port Gibson Titans 8U football team lost 22-8 to the Jackson Bears in the MYBCS Bowl on Dec. 3. Ajvaion McGrew scored the Titans’ lone touchdown on a 66-yard run in the first half. The Titans finished the season with a 7-2 record and won the Jackson Football League championship. It was the first MYBCS Bowl appearance in the program’s four-year history.

Registration will begin Dec. 16 and continue through Jan. 17. The cost is $50 per two-person team, and the double-elimination tournament is open to adults ages 18 and up. Prizes will be awarded to the top three teams.

Registration forms are available at the Parks and Recreation office, at 100 Army Navy Drive, or the Vicksburg Convention Center. For more information call Joseph Graves at 601-634-4514 or 601-831-8050.

Players will participate in co-ed varsity and junior varsity games while wearing ugly Christmas sweaters. The games will begin at 2 p.m.

Admission to the game is a new toy or monetary donation of any amount that will go to the Warren County Sheriff Department’s Toy Drive.

Adult basketball league
Registration for the Vicksburg Parks and Recreation Department’s men’s and women’s adult basketball leagues will continue through Dec. 31. The registration fees are $125 per team, plus $5 for each non-city resident, with the total not to exceed $175. Registration packets can be picked up at the Parks And Rec office at 100 Army Navy Drive or the Jackson Street Community Center.

VWAA baseball registration
The Vicksburg Warren Athletic Association has opened registration for its 2020 spring youth baseball season. All games will be played at Sports Force Parks on the Mississippi. Online registration is available at vwaabaseball.org. The registration fee is $75 per player. Coaches are eligible for a $25 discount for their child. For more information, email vwaabaseball@gmail.com.

The Vicksburg Post welcomes your items for the Game Plan. Submit items by email to sports@vicksburgpost.com