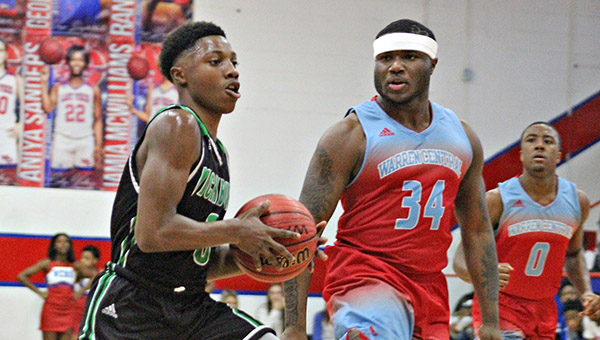 Vicksburg’s Sean Hardy (0) glides into the lane as Warren Central’s Malik Sims (34) defends in the second half of Saturday’s game. Hardy finished with 11 points and six rebounds to lead the Gators to a 47-43 victory. (Ernest Bowker/The Vicksburg Post)

The Vicksburg Gators so thoroughly dominated the first quarter against Warren Central that it always felt like they were in control, even as the margin on the scoreboard started to grow closer and closer.

The Gators never did lose the early lead they’d built, but it wasn’t until the final buzzer that they could breathe easy.

Taylon Smith scored seven of his game-high 13 points in the fourth quarter, Sean Hardy added 11 points and six rebounds, and the Gators held on to beat their crosstown rival 47-43 in a boys’ basketball game Saturday.

Vicksburg (7-3) won its second game in a row, and beat Warren Central for just the third time in 10 meetings since 2014.

“It’s really buying in as a team. These guys are working hard. When we go to practice, these guys are all in. If somebody is on the side messing around, they tell them to get focused and get locked in. It’s just a collective effort,” Vicksburg coach Kelvin Carter said.

Warren Central (6-4) had a three-game winning streak snapped, and lost for only the second time in its last seven games.

The Vikings battled uphill all day after falling behind by as many as 13 points in the first half. They didn’t reach double figures on the scoreboard until Daniel Smothers drained a 3-pointer with 3:20 left in the second quarter, and watched the Gators pull away ever so slightly every time they got within arm’s reach.

“I think Vicksburg had a good plan,” Warren Central coach Bruce Robinson said.
“We were a little too quick on some of those shots. If you give us a minute or two, we’ll figure out what we need to do against whatever defense we have. We just need to be able to make that adjustment. The first half, we just didn’t give ourselves a chance to figure it out.”

Vicksburg, meanwhile, led by 11 points at the end of the first quarter and looked as if it might turn the game into a blowout as Warren Central’s mistakes and missed opportunities mounted.

That didn’t quite happen.

Warren Central stopped the bleeding with a 7-0 run just before halftime, and trailed 24-16 at the half. The margin was still eight points heading into the fourth quarter, but had been cut to four by the time 90 seconds remained on the clock.

Vicksburg left the door open for a WC comeback by hitting only two of seven free throws in the last 1:16. The Vikings got it to a one-possession game when Bowman split a pair of free throws with 45 seconds left, and again on a 3-pointer by Travis Williams with 21 seconds to go. In between, Smith hit a layup for Vicksburg.

The Vikings missed two 3-pointers that would have tied the score, however, and Peytin Jackson split two free throws with four seconds left to make it 47-43 and finally put the game on ice.

“As bad as we played, we still had a chance to win it,” Robinson said. “I thought the difference in the basketball game was the toughness. Vicksburg was a little bit tougher than we were today. But it’s just one game. It’s still December. It’s a journey. So we’ll get back at it.”