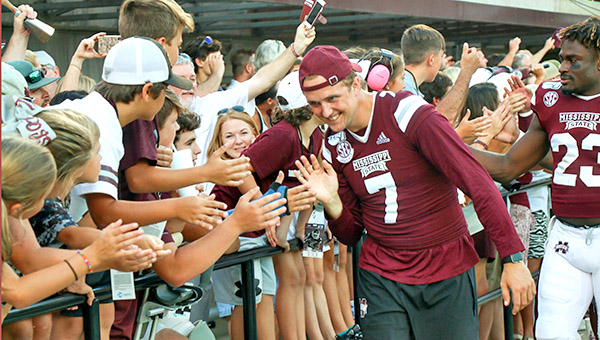 Mississippi State quarterback Tommy Stevens (7) celebrates with fans after a win this season. The Bulldogs were selected to play Louisville in the Music City Bowl, Dec. 30 in Nashville. (Walter Frazier/For The Vicksburg Post)

Mississippi State and Louisville have not played each other in the regular season since a four-game home-and-home series in the 1970s.

It’s starting to seem, however, that they can’t avoid each other in the postseason.

Mississippi State (6-6) and Louisville will play each other in the Franklin American Mortgage Music City Bowl Dec. 30 in Nashville, it was announced Sunday.

The game will start 3 p.m. and be televised on ESPN.

It is the second time in three years that the two teams will face each other in a bowl game. Mississippi State beat Louisville 31-27 in the TaxSlayer Bowl in Jacksonville, Florida, to finish the 2017 season.

The Bulldogs’ only previous appearance in the Music City Bowl was in 2011, when they beat Wake Forest 23-17. They won three of their last four games this season to qualify for a bowl for the 10th year in a row.

Louisville had an eight-year bowl streak snapped in 2018, but bounced back this year to finish with a 7-5 record in the Atlantic Coast Conference.

Its only other appearance in the Music City Bowl was the last bowl game it won, a 27-21 victory over Texas A&M in 2015. The Cardinals lost to LSU in the 2016 Citrus Bowl and to Mississippi State in the 2017 TaxSlayer Bowl.