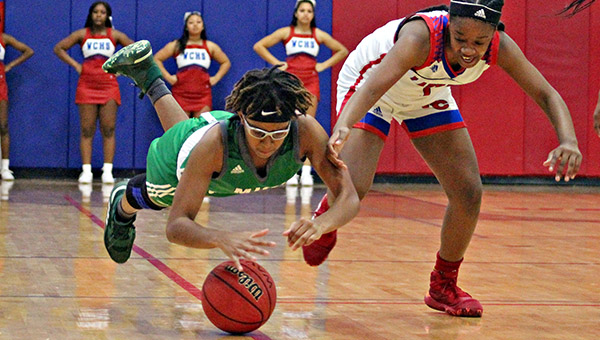 All season long, the Vicksburg Missy Gators have been a team that seems to run in up and down cycles, and Saturday’s game against archrival Warren Central was no exception.

The Missy Gators never trailed in the first half, and then spent most of the second trying to catch up after blowing the lead. Luckily for them, they repeated the cycle just in time to salvage a victory.

The Missy Gators outscored Warren Central 23-13 in the final period, and had a 12-2 run that propelled them into the lead with a minute remaining.

“I thought the girls did a good job persevering. We stayed focused and made the necessary adjustments at the end. I thought it was good,” Vicksburg coach Troy Stewart said. “The girls actually believed in themselves. They didn’t think they were going to lose, so they worked as hard as they could. We made a couple of buckets when we needed to. Missed a couple as well. I just think they believed.”

Warren Central coach Darein Hilliard was surprisingly upbeat after a tough loss. The Lady Vikes (8-3) rallied from a terrible start — they trailed by nine points midway through the second quarter — and foul trouble to have a chance to win. Six of the 11 players on the roster finished with at least three fouls.

Raney and Bracey both fouled out. Segrest finished the game with four fouls.
Warren Central’s three losses have been by a total of 12 points.

“We went to the bench and put some kids in that had not played a lot, but they answered the bell today. We felt coming out after halftime that we were probably going to be in good shape, and we were. We just didn’t finish the deal today,” Hilliard said.

Vicksburg (5-4) had its own comeback. Warren Central overcame its bad start to take the lead early in the third quarter, and eventually extended it to six points with about 2 ½ minutes to play in the game.

Vicksburg’s Cabria Barnes drilled a 3-pointer, and Sims made another a minute later. Sims went 3-for-6 at the foul line over the next 30 seconds to put the Missy Gators ahead 53-52. Burns added one free throw and Karmen Davenport two to cap a 12-2 run with Vicksburg ahead 56-52 with 32.4 seconds remaining.

“Free throws played a big part in that. We just stepped up and made free throws,” Sims said, adding of Barnes’ 3-pointer, “We really needed it. I think we were down six and really needed a 3. That really gave us a boost in our confidence.”

The teams continued to exchange free throws over the last 30 seconds, and Jamiya Sanders hit a floater with 8 seconds left to pull the Lady Vikes to within 58-56.

Burns tacked on one more free throw for Vicksburg, and Aniya Sanders had a chance to tie it at the buzzer. Sanders’ contested, off-balance 3-pointer fell short as the buzzer sounded.

“You always would love to beat your crosstown rival. It happened this time. I’m excited about that,” Stewart said. “But in the grand scope of things it’s just one of those games that hopefully catapults us into something better.”