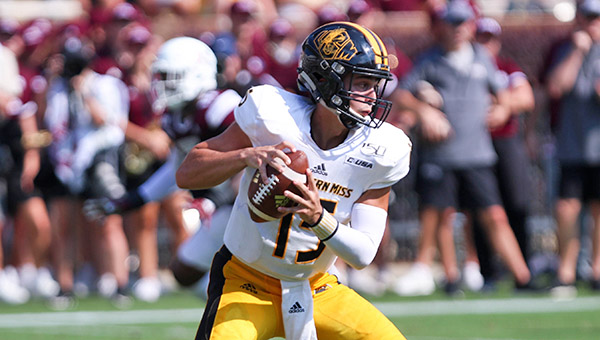 Quarterback Jack Abraham will lead Southern Miss into the Armed Forces Bowl against Tulane on Jan. 4, in Fort Worth, Texas. (Walter Frazier/For The Vicksburg Post)

HATTIESBURG — Southern Miss earned its fourth bowl bid in five seasons on Sunday, as well as a date with an old rival.

Southern Miss on Sunday announced it has accepted an invitation to play Tulane in the Lockheed Martin Armed Forces Bowl in Fort Worth, Texas, on Jan. 4.

This will be the 30th meeting between the teams, but first since 2010 when both were members of Conference USA. Tulane joined the American Athletic Conference in 2014.

Southern Miss leads the all-time series with the Green Wave 23-7, and won the last six meetings before the hiatus.

The Armed Forces Bowl will be played at the Amon G. Carter Stadium on the TCU campus on Saturday, Jan. 4, and will kick off at 10:30 a.m. The game will be televised on ESPN.

The Golden Eagles (7-5) will make their 14th bowl appearance over the last 18 years and 26th overall. This will be their first appearance in the Armed Forces Bowl.

Tulane (6-6) will play in a bowl game in back-to-back seasons for the first time since the 1979-80 seasons. It beat Louisiana-Lafayette 41-24 in the AutoNation Cure Bowl last season in Orlando, Florida.

Among the players on Tulane’s roster are linebacker Nick Anderson, a former Vicksburg High star who has 21 tackles and one sack this season.