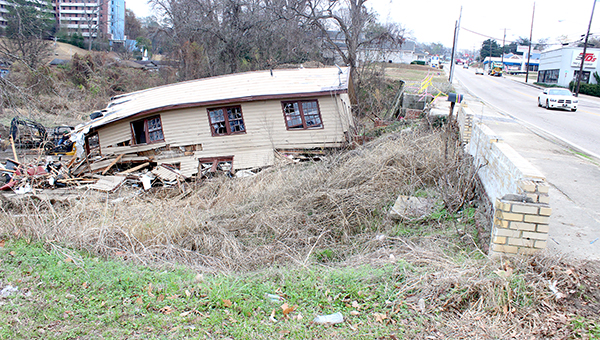 Debris sits at the rear of a vacant building at 2603 Clay St. we a track hoe goes through the process of taking it down. The building was once the site of a chiropractic clinic on Clay Street. (John Surratt/The Vicksburg Post)

If you are one of the hundreds of drivers who pass along Clay Street each day and happened to notice what looked like a home that had collapsed, don’t worry; it’s collapsed on purpose.

The now-vacant building, located at 2603 Clay St. that was once a chiropractic clinic, is being torn down by its new owners.

Monday morning, a track hoe was working on the rear of the sloping building that once faced the Firestone Auto Care Center on Clay St.

“I acquired this property back in early spring, and was hoping to save it, but it just wasn’t worth saving. I wished it was,” property owner Pat Daughtry said. “It was too close to the street; it was right up on Clay Street.”

He said the property will be up for sale after the building is removed.

According to Vicksburg city directories from 1958 and 1966, the building housed the practice of chiropractor John W. Donovan. Daughtry said the building was built for Donovan’s practice before Clay Street was widened from two to four lanes and had room for cars.

“It was set back just enough to where they had an entrance and enough room to park,” he said, adding the clinic was at street level and the living area downstairs under the clinic.

According to county property tax records, the most recent use of the building was as a duplex.