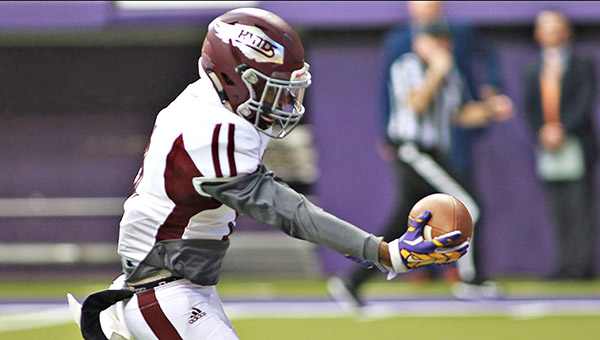 You’re in Four Down Territory, where we highlight four notes, stats and trends from the weekend that was in Mississippi high school football, college football and the NFL. This is the final edition of Four Down Territory for 2019.

Hinds Community College’s season ended with its first bowl appearance in a in six years, but not a victory.

Sheldon Cage ran for 153 yards and two touchdowns, both in the fourth quarter, as No. 4 Iowa Western pulled away from No. 8 Hinds for a 34-19 win in the Graphic Edge Bowl in Cedar Falls, Iowa, on Sunday.

The game was tied 6-6 at halftime, but Iowa Western (9-3) held Hinds to just 199 yards of total offense and took control of the game in the second half. Cage had 125 of his 153 rushing yards in the last two quarters, including touchdowns of 15 and 4 yards, and was named the game’s offensive MVP.

Cage’s 4-yard TD run with 1:34 remaining gave Iowa Western a 34-19 lead and iced the game. He carried the ball eight times for 59 yards on the 12-play drive that took nearly five minutes off the clock.

Two of Hinds’ three touchdowns came courtesy of its defense. DeMario Nichols returned an interception 14 yards for a touchdown in the second quarter, and Artavious Washington took another pick 69 yards to the end zone in the fourth.

Nichols also had five solo tackles and a forced fumble, and was the bowl’s defensive MVP.
Former Warren Central star Joe Shorter scored Hinds’ other touchdown, on a 13-yard run late in the third quarter. Shorter finished with 19 rushing yards on 12 carries.

Don Ragsdale led Hinds’ offense with 17 carries for 82 yards. Elijah Walker was 7-of-14 passing for 99 yards, with one interception. Iowa Western’s defense had 13 tackles for loss and three sacks.

Hinds finished the season with a 7-3 record, with all three losses coming against teams ranked in the top 11 of the NJCAA national rankings — No. 1 Mississippi Gulf Coast, No. 4 Iowa Western, and No. 11 Jones College.

Gulf Coast won the NJCAA championship on Thursday by beating No. 2 Lackawanna College 24-13.

“I am just proud of my team. These guys played hard all year long and never gave in,” Hinds head coach Larry Williams said. “We had great leadership from our sophomore class, and I want to thank them for that and wish them the best of luck in their future endeavors. They will always be a part of our family. As for the guys coming back, we are looking forward to getting after it in the spring and summer to continue to improve as a program and get ready for the 2020 season.”

The Mississippi High School Activities Association crowned six new football state champions over the weekend, and for the first time in 18 years none of them had a perfect road to the title.
North Side and Picayune, the last two undefeated teams in the state, lost in the Class 2A and 5A championship games, respectively. It is the first time since 2001, and just the third time since the playoff era began in 1981, that no team in the MHSAA finished the season without at least one loss.

The 1991 and 2000 seasons also ended without a perfect champion.

North Side, led by former Vicksburg High coach Tavares Johnson, was 14-0 before getting hammered 49-18 by Taylorsville in the Class 2A championship game on Saturday.

Later that night, West Point beat Picayune 38-26 to end the Maroon Tide’s quest for perfection. Picayune entered the game with a 14-0 record.

West Point won its fourth consecutive Class 5A championship, and 11th state title overall. The latter total ties it with South Panola for most in MHSAA history.

In the Class 6A championship game on Friday night, Oxford rallied from an 18-point deficit to beat Oak Grove 31-21.

Oxford’s first state title marked the ninth year in a row that there has been a different champion in the state’s largest classification. No Class 6A team has won back-to-back titles since South Panola did it in 2009-10.

In the other championship games this weekend, Nanih Waiya beat Lumberton 28-13 for its second straight Class 1A title; Jefferson Davis County topped Noxubee County 25-15 in Class 3A; and Corinth won its first title by crushing Poplarville 55-21 in Class 4A.

Alcorn State once again showed off its closing speed against Southern University.

The Braves beat Southern 39-24 on Saturday in the Southwestern Athletic Conference championship game. It was the second year in a row they’ve beaten the Jaguars in the championship game, and the fifth time overall. During the five-game series winning streak, Alcorn has outscored Southern 53-14 in the fourth quarter.

Alcorn scored the last 10 points in the 2018 SWAC championship game to win 37-28. On Saturday, it outscored Southern 23-7 in the fourth quarter and scored 17 unanswered points in the last 5:07 to take the lead and then blow open a close game.

Alcorn took a 25-24 lead on Corey McCullough’s 23-yard field goal with 5:07 left. After a defensive stop, De’Shawn Waller scored on a 6-yard run with 1:57 remaining, and Taurence Wilson returned an interception 53 yards for a touchdown 45 seconds later to seal the victory.

Alcorn (9-3) won its fourth SWAC title in six years, and will face North Carolin A&T in the Celebration Bowl in Atlanta on Dec. 21 for the HBCU national championship.

4
The Green Bay Packers’ punt return unit has been remarkable this season for just how unremarkable it has been.

Entering Week 14, the Packers had only returned nine punts for a total of minus-8 yards. That put them on pace to challenge longstanding NFL records in both categories, until Tyler Ervin had a modestly good day Sunday in a 20-15 victory against the Washington Redskins.

Ervin returned four punts for 51 yards to push the Packers out of the danger zone of NFL infamy.

The league record for fewest punt returns in a season is 12, shared by the 1981 Colts and 1982 Chargers. With 13 returns, the Packers could still wind up with the second-fewest in a 16-game season.

Eleven teams had 15 or fewer returns, but three did it during the 1982 season that was shortened to nine games because of a player strike. Seven others did it before the NFL went to a 16-game schedule in 1978.