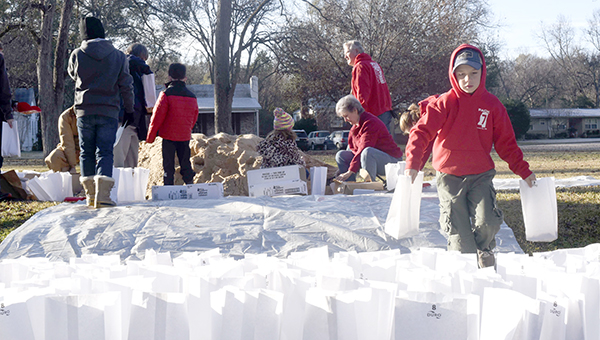 Travis Giles of Cub Scout Pack 7 carries luminaries to be placed around the Glenwood neighborhood in this file photo from 2017. (Courtland Wells/The Vicksburg Post)

Sometimes it’s hard to find time to relax during the holiday season.

There are parties to attend and presents to wrap.

For those needing to take a break from all the hustle and bustle, the Glenwood Circle neighborhood and surrounding areas will again be lit with luminaries providing for a peaceful and awe-inspiring outing.

For more than 20 years, passersby have had the opportunity to enjoy the luminaries that line the streets, and this year the display begins at sundown Saturday.

What began with the homeowners has been passed on to a local Boy Scout troop, and since 2012 Cub Scout Pack 7 has continued the decades-long tradition.

Gregory Sparks, who is the Cubmaster of Pack 7, said the cub scouts will begin setting out the paper lanterns at 8 a.m. Saturday morning.

More than four cubic yards of sand is used to fill the candle-lit white bags for the more than 5,000 luminaries that will be placed along the streets.

Sparks said residents are responsible for lighting the candles and the removal of the lanterns after use.

Setting out the luminaries is a fundraiser for the pack, Sparks said, with proceeds going towards camping trips.

“We will also use it for the Boy Scouts of America national fees,” he said.

The national fees doubled, Sparks said, after their dues had been set for the year.

Currently, there are 22 members of the pack, Sparks said, representing most of the schools, both public and private in Warren County.

In addition to being a fundraiser, the luminary project also serves as a service project for the scouts as well as an outdoor activity.

Sparks encourage everyone to get out and see the luminary lined streets.

“It’s beautiful out there,” he said.

Cub Scout Pack 7 is chartered by the Knights of Columbus Council 898.