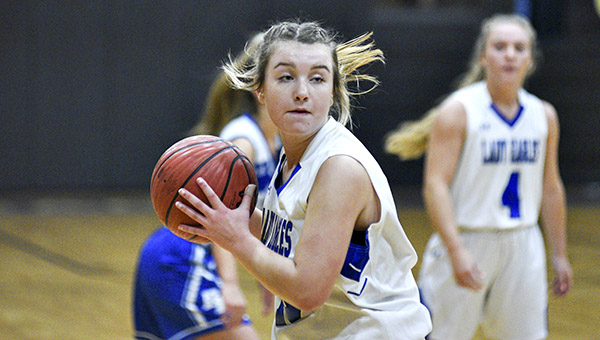 At the end of the first quarter Tuesday night, things were going pretty well for the Porter’s Chapel Academy Lady Eagles. By halftime, the situation had deteriorated considerably.

Brookhaven led PCA 13-12 after the first quarter, then outscored the Lady Eagles 54-5 over the last three periods. The Lady Panthers hit eight 3-pointers in the game — four of them by Warren — and beat PCA for the second time this season.

Lillie Gates added 12 points — eight of them in the fourth quarter — and Makayla Martin had seven for Brookhaven. Brittnee Martin led PCA with six points, and Carlyle Smith had four.

PCA (6-5) lost its second game in a row, after winning the previous three. It will host Benton Academy Friday at 6 p.m. in its final game of 2019. The next game after Friday is not until Jan. 6 at Rebul Academy.

Girls
Brandon 79, Warren Central 44
Tondria Minor and Gabrielle Collier combined for three 3-pointers and 18 points in the first quarter as Brandon rode a hot start to a rout of Warren Central.

Minor scored 10 points in the first quarter and finished with 16 for Brandon (9-2). Collier hit a pair of 3-pointers in the first quarter, four in the game, and also scored 16 points. The Lady Bulldogs jumped out to a 24-11 lead at the end of the opening period, and stretched it to 18 points at halftime.

Aniya Sanders scored 18 points and Ashlea Raney eight for Warren Central (7-4), which has lost back-to-back games for the first time this season.

(G) Vicksburg 65, Raymond 62
Tiarra Jones had a massive double-double with 19 points and 18 rebounds to lead the Vicksburg Missy Gators past Raymond for their third win in a row and fourth in five games.

Boys
Raymond 74, VHS 63, OT
Jabarie Robinson scored eight of Raymond’s 16 points in overtime, and the defending MHSAA Class 4A champions pulled away from Vicksburg on Tuesday.

Vicksburg (7-4) overcame a five-point deficit in the fourth quarter, but was outscored 16-7 in the extra period. Raymond (6-3) went 6-for-7 at the free throw line in overtime.

Robinson finished with 17 points for Raymond, while Jordan Marshall scored 15 and Martavin Williams had nine.

Peytin Jackson scored 13 of his 15 points in the second half and overtime to lead Vicksburg. Cameron Butler hit four 3-pointers and finished with 16 points, and Taylon Smith scored 14. Smith also made four 3-pointers.

Thirteen of the 16 players on Brookhaven’s roster scored.