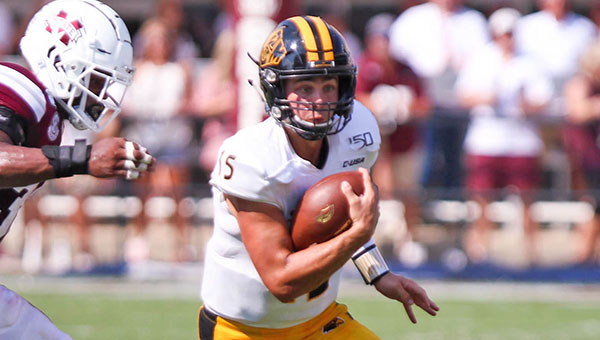 HATTIESBURG — A bowl game between two mid-level teams in Group of Five conferences might not sound very exciting to some fans.

For the teams involved, it’s exactly what they wanted.

Southern Miss (7-5) and Tulane (6-6) were selected to play each other in the Lockheed Martin Armed Forces Bowl on Jan. 4 in Fort Worth, Texas.

It’s a renewal of an old rivalry, in an accessible location, and in a great time slot — all things that had bowl organizers and officials from both schools fired up about the matchup.

“We’re thrilled to be part of the Armed Forces Bowl. You want certain things to come together and it doesn’t always work that way, but this one checks all the boxes,” Southern Miss athletic director Jeremy McClain said.

This will be the 31st meeting between the teams, but first since 2010 when both were members of Conference USA. Tulane joined the American Athletic Conference in 2014. They had played every year from 1979 to 2006.

The schools agreed to restart the rivalry with a four-game home-and-home series, but it won’t begin until 2022.

“It’s an old Conference USA game and a rivalry. It’s two familiar foes,” Southern Miss head coach Jay Hopson said. “It’s a local game, and it’s something we’ve been trying to do. It creates a lot of interest for the fan base.”

Armed Forces Bowl executive director Brant Ringler said a round of negotiations shuffled around some of the tie-ins with other bowls, and his wound up with Conference USA’s Southern Miss vs. Tulane of the American Athletic Conference.

“That worked out well for us, because we felt like Tulane was a good fit for travel with us and Southern Miss is as well,” Ringler said. “We’re always lucky to have one regional team, but to have two is fantastic. Tulane and Southern Miss both have tremendous alumni bases in this marketplace.”

The date and time of the game was an attraction for both teams as well. It will be played on Saturday, Jan. 4 at 10:30 a.m., and is the only bowl game scheduled for that day. It will be televised on ESPN.

Both Hopson and his Tulane counterpart Willie Fritz said that spotlight was a valuable tool for recruiting and exposure.

“The neat part is, we’re going to be the only game on TV. If you’re watching football, you’re going to be watching the Armed Forces Bowl with Tulane and Southern Miss. That’s neat,” Fritz said.

Each team will receive a $900,000 payout for playing in the bowl, but Southern Miss athletic director Jeremy McClain said that figure was fairly inconsequential in terms of a school’s athletic budget. The greater value, he said, was in giving exposure to the university on a national platform.

“This is not about the financial aspect. When you go to these bowl games, you’re covering expenses. It’s about making sure the experience is right for our student-athletes and our fan base,” McClain said. “It’s hard to put a finger on what it means, dollars and cents wise. There’s greater value in that (exposure) than anything we’re doing.”

Tulane (6-6) will play in a bowl game in back-to-back seasons for the first time since the 1979-80 seasons. It beat Louisiana-Lafayette 41-24 in the AutoNation Cure Bowl last season in Orlando, Florida.

Among the players on Tulane’s roster are linebacker Nick Anderson, a former Vicksburg High star who has 21 tackles and one sack this season.

Southern Miss will make its 14th bowl appearance over the last 18 years and 26th overall. This will be its first appearance in the Armed Forces Bowl and, Hopson said, was a welcome reward after the team was snubbed for a bowl bid last season despite being eligible with a 6-6 record.

“Let’s say I feel better this year on Sunday than I did last year,” Hopson said with a laugh.