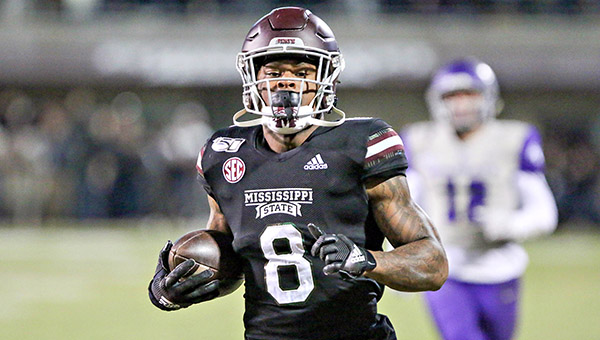 Mississippi State running back Kylin Hill, who led the SEC in rushing this season, announced Thursday that he will skip his senior season and enter the NFL draft. (Walter Frazier/The Vicksburg Post)

STARKVILLE — After a historic season for Mississippi State, Kylin Hill is taking his talents to the next level.

The junior running back announced Thursday that he will skip his senior season to enter the 2020 NFL draft. In a post on Mississippi State’s athletics web site, Hill said he will play in the team’s bowl game later this month.

“After much prayer and discussion with my family, I have decided it is time for the next chapter in my life and football career,” Hill said in his post. “I will be forgoing my final season of eligibility and entering my name in the 2020 NFL Draft. I look forward to continuing to chase my lifelong dream of playing on Sundays.”

The junior from Columbus won the C Spire Conerly Trophy as the best college football player in Mississippi, and earlier this week was named a first-team All-SEC selection by The Associated Press, and a second-team selection by the league’s coaches.

Hill, Dixon (2009) and Josh Robinson (2014) are the only Mississippi State running backs to earn All-SEC recognition from both the media and coaches since the inception of the the coaches’ team in 1999.

Hill has 2,474 rushing yards and 16 touchdowns in his college career. He has started 23 of 25 games over the past two seasons.

“My time here has been an incredible experience, and I will never forget where I came from. Mississippi State is a special place and has been since I first stepped foot on campus. I am truly blessed and will always hold my Bulldog Family close to my heart,” Hill said in his post. “I can’t wait to wear the Maroon and White one last time with my brothers and play in the Music City Bowl.”