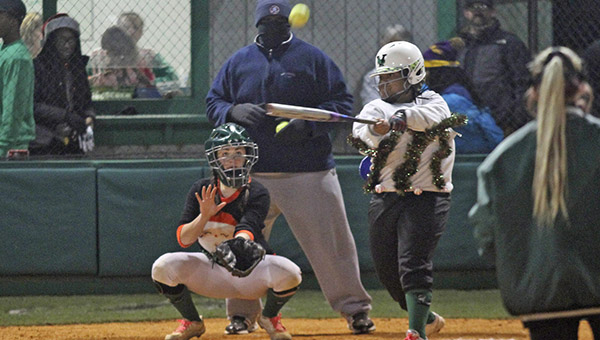 A Vicksburg High softball player swings at a pitch during the 2017 Ugly Sweater softball game. This year’s edition of the game is scheduled for Saturday at Halls Ferry Park at 2 p.m., and will benefit the Warren County Sheriff’s Office’s annual toy drive. (Courtland Wells/The Vicksburg Post)

The event features co-ed softball games involving baseball and softball players from Warren County’s four high schools. All of the players will play the game while wearing the ugliest Christmas sweaters they can find. The cost of admission for fans is either a monetary donation or a new, unopened toy.

The Ugly Sweater game started as a project for Vicksburg High School. This year, however, VHS softball coach Brian Ellis said he reached out to all four county high schools to get involved. Nearly 100 softball and baseball players are expected to participate on Saturday.

“We felt like involving everybody in it gave us an opportunity to collect more for the Sheriff’s Department,” Ellis said. “And for me, the game of softball is growing in Vicksburg. In the summer the girls are all playing together and they make friendships with people from other teams. So it’s a chance to do something together. This is a way for us to understand there’s a lot of things we pull together for as a school district.”

In addition to the games, a Christmas carnival will be set up at Halls Ferry Park. An award will also be given to the player with ugliest sweater.

Co-ed teams will be formed from the pool of players, and everyone will play in a loose and relaxed atmosphere. Fans can purchase “chance cards” that will force players to perform stunts on the field such as batting on their knees or running backward around the bases.

Because of the large number of players this time, Ellis said it was still undecided exactly what shape the games themselves would take. The action starts at 2 p.m. and is expected to continue into the early evening.

“We have a very good possibility of having four varsity and junior varsity teams. So I’m not sure yet if we’ll have them play each other, or play King of the Field where you play an inning or two and the winner stays on until they lose,” Ellis said.

Teams might keep score to determine who stays on the field and who takes a seat, but the real winner is the Sheriff’s Office’s toy drive.

The annual drive partners with the Beyond Walls Ministry to help provide the children of inmates at the Warren County Jail, as well as children of crime victims with Christmas presents when they might not otherwise have them.

Last year’s Ugly Sweater game brought in several hundred dollars and four large boxes of toys for the cause.

“The Vicksburg High girls softball team started this game several years ago and it has grown. It is very helpful to us to make sure all of the inmates’ children and children of crime victims have a Christmas,” Warren County Sheriff Martin Pace said. “I can’t say enough good things about these kids. They do it for fun, but also with the understanding that they are doing something good for the community.”