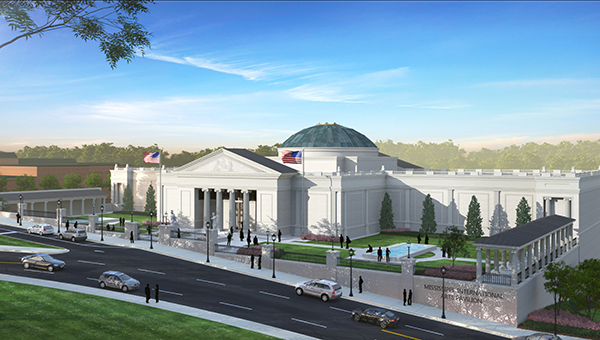 An artist's rendering of the Mississippi International Arts Pavilion.

The board of directors of the Mississippi International Arts Pavilion is trying to raise awareness of its plans to build the pavilion in Vicksburg by selling a princess.

Kendra Reed, a member of the pavilion board, told members of the Port City Kiwanis Club Thursday the board is selling replicas of the Porcelain Princess, a statue featured in the Porcelain Room from the Royal Palace of Aranjuez, Spain, for $2,000 each to raise money and awareness for the art pavilion.

“The Porcelain Room is considered the most beautiful room in the world,” Reed said. “The key figure in this room is called the Porcelain Princess.

“Jackson has the catfish, Hattiesburg has swans, and Meridian has the carousel horse,” she said.  “Our ambassador will be the Porcelain Princess. There are only 30 of them (available), and we’re going to have them placed around town so that people will see what we are trying to do and create conversation (about the pavilion).”

Plans for the pavilion were announced in January 2018, and the city of Vicksburg has donated a tract of land on Mulberry Street north of the Vicksburg Convention Center between the convention center and South Street for the building.

In almost two years after its announcement, the board of directors for the Mississippi International Arts Pavilion has raised a total of $200,000 in pledges and cash toward the $30 million project.

“Our largest pledge is from Guaranty Bank, and they have pledged $100,000,” said Jack Kyle, executive director of MSIAP. “They are paying it in increments of $20,000 per year and we have received their first payment. We have a number of individuals giving from $200 up to $25,000 commitments.”

Kyle said board members are talking with other individuals and organizations about donating to the museum and will be approaching state officials and the state’s congressional delegation for funds to build the arts pavilion.

He said ground is not expected to be broken on the project until the board has $20 million toward the project.

One approach being taken toward larger private donors, Reed said is naming rights — having a donor’s included in the name of an exhibit room at the pavilion.

The other wing of the building will house approximately 10 galleries, five of which will be period room installations.

The period rooms include reproductions of two rooms from Russia, one from Germany and two from Spain, including a replica of the Porcelain Room. The Porcelain Room replica is the only one in the world.

Reed said another section of the building will be dedicated to Mississippi artists and there will be an area for rotating exhibits.