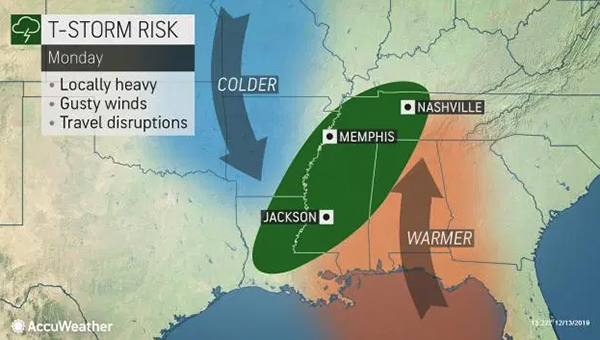 A fast-moving eastbound cold front has the potential to deliver some extreme weather to Warren County as it passes through the area Monday.

“With this front, we’re expecting showers and thunderstorms, and some of those thunderstorms could be severe,” said meteorologist Thomas Winesett with the National Weather Service office in Jackson.

“With those severe storms, we’re looking at hazards; possibly damaging winds, large hail and a few tornadoes as well,” he said.

Winesatt said the storms are expected to hit the area late Monday morning or early Monday afternoon, adding the severe storms have the potential to have 60 mph or higher winds.

According to the National Weather Service website, Warren County is presently at a slight risk for severe weather, but Winesatt said that condition could change before the storms hit Monday, depending on the information received from storm models over the weekend.

He said the front originated in the area of the Gulf of Alaska and is expected to move to the West Coast and be in the southern plains by Sunday. “It will be in the Mississippi River Valley by Monday,” Winesatt said. “It’s pretty progressive; it’s not going to hang around very long.”

Once the front passes through, he said, temperatures are expected to drop, “but there won’t be any record-breaking temperatures. The high Tuesday will be 49 (degrees) and the low Tuesday night will be 29.

“The middle of next week it will be pretty chilly, and it won’t be until Thursday next week when we start warming back up closer to 60.”