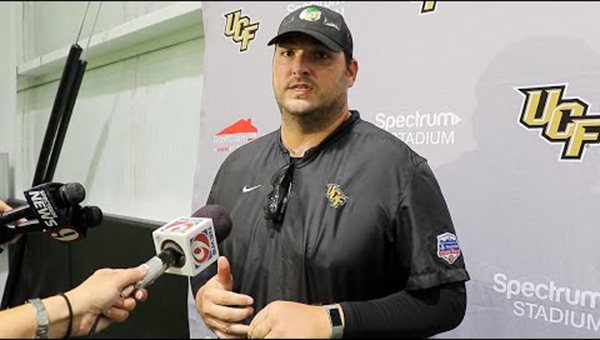 OXFORD — Lane Kiffin has a new team at Ole Miss, and now he’s started to assemble his coaching staff.

Kiffin hired the first three members of his inaugural staff on Thursday, bringing in Jeff Lebby as offensive coordinator, Wilson Love as the strength and conditioning coach, and Kevin Smith in an unspecified assistant’s role.

The biggest of the hires is Lebby, who comes to Ole Miss after a two-year stint in charge of Central Florida’s high-powered offense.

Under Lebby’s direction this season, UCF ranks fourth nationally in total offense (536.6), the most in program history. The Knights also rank sixth in scoring (43.0), racking up 40 or more points in seven of their eight contests.

UCF quarterback Dillon Gabriel set the school’s single-season passing mark with 3,393 yards and 27 touchdowns while leading the Knights to an 8-3 record and berth in the Gasparilla Bowl.

Lebby has also worked at NAIA Southeastern University and spent nine seasons in a variety of roles on Baylor’s staff.

Lebby’s hire appears to bring a quick end to the tenure of Rich Rodriguez as an Ole Miss assistant.

Rodriguez was a high-profile hire as the offensive coordinator to former head coach Matt Luke last offseason, and on his watch the Rebels ranked second in the Southeastern Conference in rushing. Kiffin said he’d interview the remaining members of the Ole Miss staff to see who he might retain, but Rodriguez’s name has been removed from the list of coaches on the school’s web site.

Lebby is not the only new coach with ties to UCF. Smith was a running back there and rushed for 2,567 yards and 29 touchdowns in 2007. He spent five seasons in the NFL with the Detroit Lions, one more with Winnipeg in the CFL, and then began a coaching career at Central Florida in 2015.

Smith was hired by Kiffin as Florida Atlantic’s running backs coach in 2017. The Owls rushed for more than 2,000 yards as a team in all three of Smith’s seasons on the staff.

Love, meanwhile, also spent the past three seasons on Kiffin’s staff at Florida Atlantic. He also was an assistant strength and conditioning coach at Alabama in 2015 and 2016.