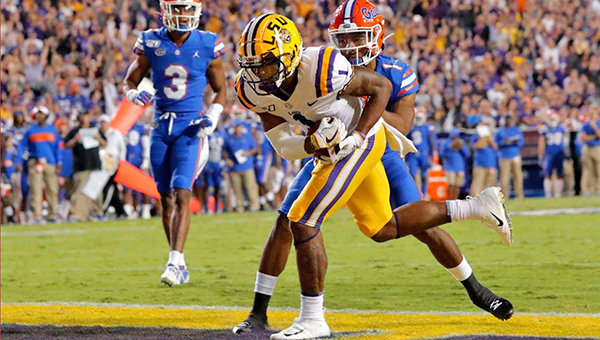 ATLANTA — LSU’s football team seems to be spending as much time in Atlanta as in Baton Rouge this month.

The Tigers were there last weekend for the Southeastern Conference championship game. They’ll be back in two weeks for a College Football Playoff semifinal against Oklahoma.

This week, they came to the city to pick up a truckload of trophies.

Quarterback Joe Burrow, wide receiver Ja’Marr Chase, safety Grant Delpit and head coach Ed Orgeron all were named the best in the country at what they do Thursday at the College Football Awards Show.

“The award comes with winning,” said Delpit, who won the Jim Thorpe Award as college football’s best defensive back. “It’s really a team award, and if I could drop the award for a national championship, I would. We’re not done yet. We have bigger dreams, bigger hopes, coming up the 28th.”

Chase won the Biletnikoff Award as the country’s top receiver, and Orgeron was named the national coach of the year.

The biggest winner, however, was Burrow, who likely only started a long weekend of acceptance speeches. He picked up the Davey O’Brien Award as the top quarterback, and the Walter Camp and Maxwell awards as the national player of the year.

On Friday he headed to New York for the most prestigious of all, the Heisman Trophy ceremony. Burrow is LSU’s first finalist for the award since cornerback Tyrann Mathieu in 2011, and a heavy favorite to become its first winner since Billy Cannon in 1959.

“I’m a firm believer in good things happen to good people who work hard,” Burrow said, “and I think I’m one of those people.”

One of the beneficiaries of Burrow’s success was Chase. The sophomore caught 73 passes for 1,498 yards, and tied the SEC’s single-season record with 18 touchdowns. Chase joined Josh Reed (2001) as Biletnikoff winners from LSU.

Chase said he wrote “Biletnikoff Winner” on a Post-It note each day during the offseason and stuck it to his bathroom mirror to remind him of his goal. On Thursday he achieved it.

Orgeron is also living a dream. A dozen years after flaming out at Ole Miss, six years after being turned down by Southern California, and three years after taking over on an interim basis for Les Miles, the Louisiana native has made LSU the talk of college football.

The Tigers are 13-0 and the top seed for the College Football Playoff. The focus, however, is squarely on their Dec. 28 Peach Bowl match-up with Oklahoma (12-1) and eventually winning a national championship.

Chase agreed. Thursday was a great night for the program and a good dinner. Saturday will be as well, when Burrow heads to New York. The good vibes will last until Monday, and then they have to get ready for the next trip to Atlanta.

“It’s a good night for us,” Chase said. “But we’re going to have to forget about this in the next 48 hours and get back to work.”