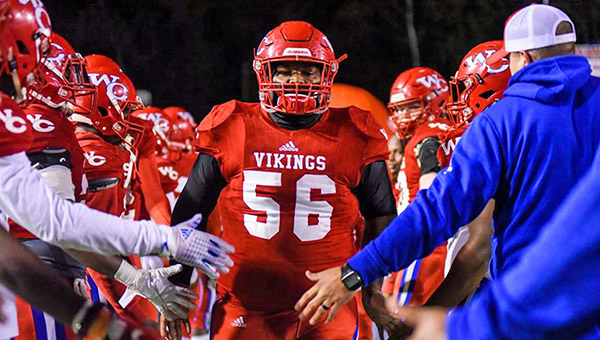 A couple of years ago, Chris Winston was a promising young defensive lineman for Warren Central. Even now, head coach Josh Morgan says Winston is one of the best on the team.

Winston’s future wasn’t sacking quarterbacks, however. It was in protecting them. And, it turns out, he’s pretty good at that as well.

Winston switched to the offensive line before his junior season and started the next 24 games there for the Vikings. Last week he was named to the Mississippi Association of Coaches Class 6A All-State second team. This week he’ll finish his high school career by playing in the Mississippi-Alabama All-Star Game.

The best players from each state will assemble Saturday at noon at M.M. Roberts Stadium in Hattiesburg. Winston said it was an honor to be among them.

“At first I couldn’t believe it. I thought it was a joke. Then I saw the list and I was speechless. I was surprised,” Winston said. “It’s a huge honor. Not many people can say they had that experience of being a Mississippi-Alabama all-star and playing in that game.”

It’s the third year in a row that Warren Central has had an offensive lineman selected for the Mississippi-Alabama game — Braden Moody made it in 2017 and Reed Buys last year — and Winston might have had the strangest journey of them all.

Winston had 16 tackles in five games in 2017. When the Vikings were short-handed on the offensive line the following season, however, he switched sides when asked and stepped in as the team’s starting left tackle.

He made another change this year. After getting settled into his new position, he was moved inside to center out of necessity. Just like the first time he moved, Winston said he did it for the good of the team.

“It’s my personality. Most of the time I try to put other people before I put myself,” he said. “For me it wasn’t hard. Early in the season I had two or three bad snaps in a game and when they were bad, they were real bad. But I adjusted after the Brandon game and haven’t had a bad snap since.”

“Whatever we needed him to do, he did it,” Morgan said. “He was a coach on the field. A great leader. He made all the calls on the line, and was as dependable as you could ask for.”

Saturday’s all-star game will not be the last time Winston puts on a football uniform. He has gotten offers from East Mississippi Community College, Hinds Community College and Division III Louisiana College. He’s not yet certain who he’ll sign with, but definitely plans to play at the next level in 2020.

Winston isn’t sure which side of the line he’ll play on in college — he said most coaches have indicated they’d move the 6-foot, 283-pounder back to defense — but is hoping a good showing Saturday will lead to some more offers.

Morgan said he’s happy to see Winston receiving so many accolades and opportunities after everything he’s done for the Vikings.

“You like to see good things happen to good people, and that’s definitely the case here,” Morgan said. “He’s just a great kid and leader, and I’m proud of him. When you get those 15-year-old young men and watch them grow up, this is the standard you want to see them get to. We’ve got a good one representing us in the all-star game.”

MISSISSIPPI-ALABAMA ALL-STAR GAME
• Saturday, Noon
• At Southern Miss
• Online: The game will stream on FNUTL.com and mscoaches.com, under the MAC Network tab. The Mississippi Association of Coaches announced Friday that it will not be shown on regular television because of technical difficulties.