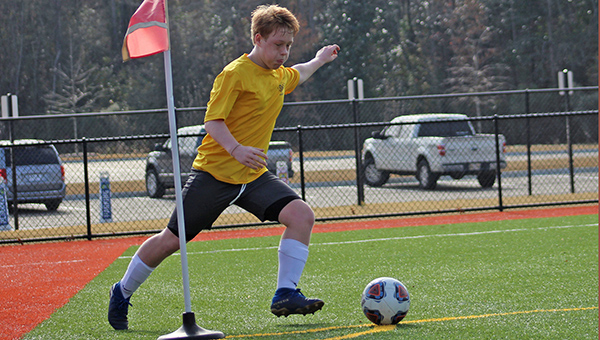 For reasons that are a mystery even to them, the St. Aloysius Flashes are carving out an identity as a team that plays much better in the second half than the first.

In a single-game setting, that can be frustrating. In the bigger picture, it might mean they’re in really good shape.

The Flashes won two games on Saturday, 4-1 over Cathedral and 5-3 over Adams County Christian, to hit the halfway point of the season with a 7-2 record.

It’s a great position for the two-time MAIS Class AAA boys soccer champions to be in when they return from the holiday break and resume their pursuit of a third consecutive state title.

“We’re right where we need to be,” St. Al coach Jay Madison said. “We’ve got some guys that we’re moving around to try to fine-tune it. But for the most part, we’re set. We’ve got some veterans that are doing what they need to do and some younger pieces around them. We’re just trying to figure out who fits where.”

St. Al rallied from an early two-goal deficit to beat Pillow Academy 3-2 in its district opener on Thursday, then was slow again getting out of the gate at its own St. Al Shootout Saturday morning at Sports Force Parks on the Mississippi.

Cooper Madison scored three minutes into the game against Cathedral, and a second goal by him sent the Flashes into halftime with a 2-1 lead. Cathedral, however, converted a penalty kick to tie it at 1-1 in the 11th minute, and St. Al missed a half-dozen scoring opportunities as the first half progressed.

“I guess we just feel a team out in the beginning and play slow to start it off. A lot of it was a morning game, too,” Cooper Madison said.

The Flashes quickly gained some distance after halftime. Will Dowe scored off an assist from Cooper Madison in the second minute of the second half, and Kieran Theriot scored in the 54th minute to make it 4-1.

St. Al wound up with a 17-7 advantage in shots, and was never threatened after regaining the lead in the 26th minute.

The Flashes maintained that momentum in their second game of the Saturday doubleheader, too. Cooper Madison scored five goals — all off assists from Theriot — as the Flashes beat ACCS 5-3.
Jay Madison said that, while pleased with the final result, he was not thrilled with the lackluster first halves his teams have been putting together.

“As a coach, you don’t really want a team to do that because we’ve gotten behind. We got behind earlier this week in our district game,” Jay Madison said. “We’re trying to work a little bit more on our warm-up. Maybe their mindset’s not right as we get ready to go. That’ll be something we work on after Christmas is trying to be a little more intense in our warm-up.”

For now, though, the Flashes will take a little break. Saturday’s games were their last for nearly a month. They won’t play again until hosting Bayou Academy in an MAIS Division II West Region game on Jan. 9.

It’s the first of five district games in January that will determine whether the Flashes are playing for a threepeat when the playoffs begin in February, or watching them from afar. Jay Madison said he and his players plan on being there.

“I told the guys that we’re developing our game not necessarily for the next couple of games that we’ve got, but more along the lines of our last two or three games of the year — which we hope to be quarterfinals, semifinals and finals,” Jay Madison said. “Some of the things you can get away with in this situation, you can’t necessarily get away with there. So we’re just trying to get better.”