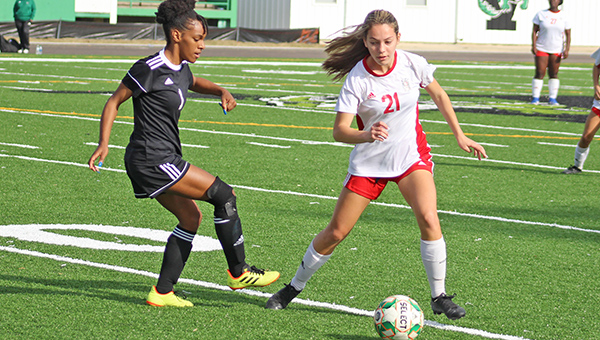 Vicksburg’s Mckenna Elder (1) and Warren Central’s Natalie Greer (21) fight for possession of the ball in the first half of Saturday’s game. Greer scored a goal to help the Lady Vikes win 8-0. (Ernest Bowker/The Vicksburg Post)

Warren Central midfielder Maddie Watkins wasn’t thrilled with the way she and her teammates started Saturday’s game against Vicksburg High. She thought they were a step slow and sluggish, and maybe not taking the game as seriously as they should.

“I guess we didn’t warm up really good and we were just playing around,” Watkins said.
It was easy to see the substance behind the self-criticism. After all, it took the Lady Vikes more than six minutes to score a goal, and they only got six in the first 30 minutes.

Bree Butler scored three goals, Madelyn Polk had one and two assists, and Warren Central routed Vicksburg 8-0 to complete a sweep of their crosstown rivalry series.

Warren Central (8-4) has won nine of the last 10 meetings against the Missy Gators (7-2), including five in a row. The last four have been shutouts. Vicksburg has been outscored 37-2 by Warren Central since its last victory in the series in 2015.

“I think it’s just the mentality when they come in and play Warren Central. The girls are 3-0 in district. They’re doing awesome. I think the communication was not there at all, and we were mentally defeated before we started,” Vicksburg coach Kristin Williams said.

Officially, it ended 10 minutes into the second half when high school soccer’s mercy rule kicked in. Unofficially, it was probably midway through the first half, when Butler scored the last of her three consecutive goals to make it 4-0.

Polk scored the first goal, in the sixth minute, off an assist from Abby Claire Fuller.
The Lady Vikes stretched it to 6-0 by halftime, as Natalie Greer and Sarah Prescott scored goals. Prescott’s was actually an own goal that she touched before it deflected off a Vicksburg player and into the net.

Kimberly Burton — who missed a penalty kick in the first half and a point-blank shot early in the second — finally pushed the ball across in the 47th minute, and Jayda Griffin capped things off in the 49th.

After finishing one of their easier wins of the season, the Lady Vikes immediately turned their attention toward what might be the biggest game of the year. They’ll head to Clinton on Monday for a crucial Region 4-6A game that begins at 5:30 p.m.

Last season, Warren Central beat Clinton 2-1 to clinch the region championship. This time, they’ll likely need to win — and win again when the teams play Jan. 14 in Vicksburg — just to earn a playoff berth, thanks to the introduction of perennial MHSAA Class 6A power Madison Central into the region.

“We have to beat two out of three teams to go to the playoffs. We beat Murrah and lost to Madison Central, so we have to beat Clinton,” Polk said.

The Lady Vikes also want to start building a winning streak against their biggest soccer rival. Last season’s victory snapped a losing skid against Clinton that had lasted more than a decade.

“It’s the most exciting game for all of us,” Watkins said. “Last year we won, so we have to own up to the title. There’s more tension every year because they used to beat us back-to-back. We just have to be ready for it.”