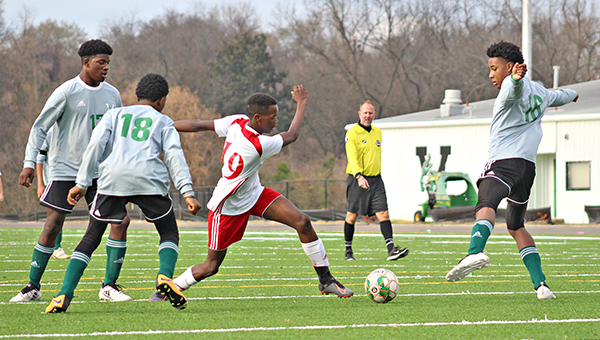 A couple of Warren Central players never showed up for Saturday’s game against Vicksburg High because they were off playing in select tournaments. A couple more left at halftime, their services no longer required for the day.

Even a bit short-handed, the Vikings had little trouble with their crosstown rival.

DeQuarian Buck scored three goals, Brandon Gilliam had two, and Warren Central beat Vicksburg 7-0 at Memorial Stadium. It was Warren Central’s 13th consecutive victory over the Gators, a streak that stretches to 2011.

“We were missing a lot of players. Three of them were gone to tournaments,” Warren Central coach Greg Head said. “The other guys worked the ball well. We were missing some players and were out of sync when we first started, but once we picked the pace up and started playing together we started connecting and scoring.”

Buck and Gilliam combined for five goals in the first half. Buck got the last two, as well as one of the easiest goals he’ll have all season.

In the 23rd minute, Vicksburg was awarded a goal kick when the ball crossed the end line, and keeper Sha’Kori Regan ran behind the net to chase it down. The secondary ball that’s kept near the goal to speed up play was set up for the kick, however, and one of Regan’s teammates booted it before the keeper was back in position.

The ball squibbed right to Buck about 15 yards from the net. He quickly returned it into the open net for a goal and a 4-0 lead.

It was that kind of day for Vicksburg (3-4-2) which lost its third consecutive game. It was outscored 15-3 in the last two. The Gators have one more game before the holiday break, Friday at Pelahatchie, and coach Kristin Williams said some work is needed to shore up the defense before the second half of the season begins in January.

“We’re going to have to work on personnel. I’m going to have to make changes, and make changes in practice. It’s kind of trial and error,” Williams said. “Every year, it’s always a different coach or new people. What was better this time was we didn’t allow as many goals in the second half and we only had two substitutions.”

Biram Neligue and Parker Green finished off the Vikings’ win with goals in the 54th and 70th minute, respectively. Head sat most of his starters in the second half.

“I’m proud of them the way they played,” Head said. “It was good that I got my JV in and got them a lot of playing time, because that always helps. We’ve got to get more depth. That was a good time today to see who can come in and step up, even if it’s just for five or 10 minutes.”

The Vikings (10-2) will next play at Clinton on Monday at 7 p.m. in a crucial MHSAA Region 4-6A game. Warren Central has already lost to Madison Central within the region, and needs to win Monday to bolster its playoff chances.