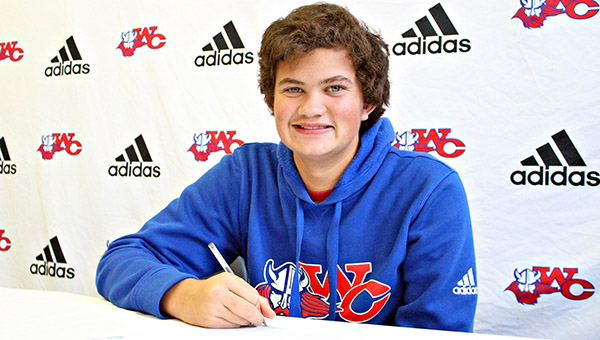 It’ll soon be his turn.

Jabour, a senior at Warren Central, recently signed to play in the junior college ranks at Jones College. He’s following in the footsteps of several other recent Vikings and his older brother Joseph, who played at East Central Community College and is now a team manager at Division II Mississippi College.

“It’s definitely continuing a legacy,” Jabour said. “You know all these people and they talk about it, so you get to add your name to the list.”

Jabour is, obviously, a solid player in his own right. He reached the second round of the MHSAA Class 6A mixed doubles state tournament last spring with partner Audrey Jennings, and has had a solid run on the Mississippi Tennis Association’s junior circuit.

Getting the chance to play in college, he said, is a dream come true.

“It’s like an accomplishment. I’ve played for about 10 years, so I’ve been working at it pretty hard and this was always part of the plan, to go play college tennis. It’s an accomplishment. It’s a goal I set that I’ve reached,” Jabour said. “It’s pretty surreal. You think about it for a while. Then you get text messages and coaches calling you, and it’s like, ‘It’s actually happening.’ It’s great.”

Jabour grew up in a tennis family. In addition to his older brother, his parents Kaleel and Carmen Jabour are avid players. John Robert said he remembers watching them play when he was a child, and picked up his own racquet about 10 years ago.

“I love tennis. I’ve been playing for 10 years, so it’s been kind of a natural love,” John Robert said. “My parents play, my brother plays, my entire family plays. I’ve loved tennis since I was 6. My family played and I got into it when I was young. I used to sit and watch them play, and when I got old enough I started playing. Ever since then it kind of grew.”

He added that having a passion for the sport will become even more important as he moves on to the next level. While youth and high school tennis is a fun hobby, playing in college is almost a full-time job. It’s a challenge he’s excited to take on, though.

“It’s definitely a leap, mainly with the amount of time you put in. In high school you can play three, four times a week. In college you play every day, multiple hours a day. It’s a lifestyle. It’s like a job, almost. It’s definitely a big leap,” Jabour said. “I’m super excited. I’m ready for the next step. I’m ready to work and get on the court.”