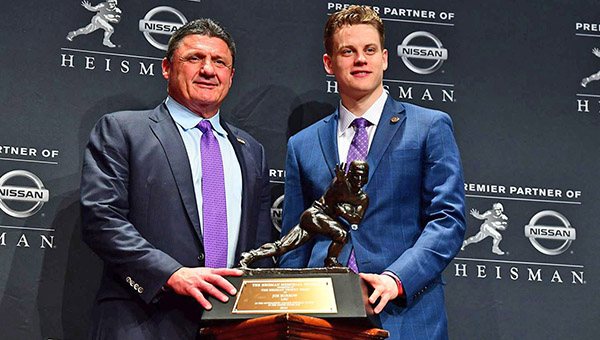 COLUMBUS, Ohio (AP) — Joe Burrow’s Heisman Trophy acceptance speech has inspired more than $150,000 in donations to a food pantry in his Ohio hometown.

The effort started on Facebook on Sunday, with nearly $156,000 pledged to the Athens County Food Pantry. Many donations have come from Louisiana.

When the LSU quarterback accepted the award as college football’s best player, he talked about growing up in Athens. His father, Jimmy, was the defensive coordinator at Ohio University from 2005-18.

“Coming from southeast Ohio it’s a very impoverished area and the poverty rate is almost two times the national average,” Joe Burrow said Saturday night. “There’s so many people there that don’t have a lot and I’m up here for all those kids in Athens and Athens County that go home to not a lot of food on the table, hungry after school. You guys can be up here, too.”

Athens High School and Ohio graduate Will Drabold said he started the effort at about 11 a.m. Sunday. with a goal of $1,000. It quickly caught fire on social media and took off when donations started coming from Louisiana. The average donation has been $33.

At least two other efforts were started, one by his former teammates at Athens High School, and Burrow retweeted the links to his more than 137,000 followers. The money is to serve the Athens County Food Bank, which serves 5,000 families in the country every year and served 9,000 meals every month.

Burrow graduated from Ohio State in three years. In 2018, with Dwayne Haskins Jr., the apparent starter in the fall, Burrow took his final two years of eligibility to LSU.

After finishing strong for the Tigers in 2018, he broke out this season. He set a Southeastern Conference record with 48 touchdown passes and led top-ranked LSU (13-0) to its first College Football Playoff appearance.

The Tigers will face No. 4 Oklahoma and Hurts on Dec. 28 at the Peach Bowl in Atlanta.
He won the Heisman in a record-breaking landslide, becoming the first LSU player to win the trophy in 60 years.

“That was as cool a night and moment as I’ve ever been around,” said Ohio State coach Ryan Day, who was there with his Heisman finalists, Justin Fields and Chase Young. ”Joe, although he thought that out, that was just him being himself. … Talk about class. There’s not a classier guy out there. I was humbled to be in the room and just be a part of the journey.”

Burrow received 2,608 points and 841 first-place votes, a record 90.7 percent of all the first-place votes available. He also set a record for percentage of points available received with 93.8, breaking the mark of 91.6 percent set by Troy Smith of Ohio State in 2006. Burrow was named on 95.5 percent of all ballots, breaking the record of 95.2 percent set by Oregon’s Marcus Mariota in 2014.

Oklahoma quarterback Jalen Hurts was second with 762 points. Fields was third and Young was fourth.

After hugging his parents and coaches, Burrow made his way to the stage inside the PlayStation Theater in Times Square. He started his acceptance speech, stopped and took 23 seconds to compose himself before rattling off the names of LSU’s other offensive players.

“What a special moment,” LSU coach Ed Orgeron said. “I thought Joe handled everything first class. It’s the first time I’ve seen him get that emotional.”