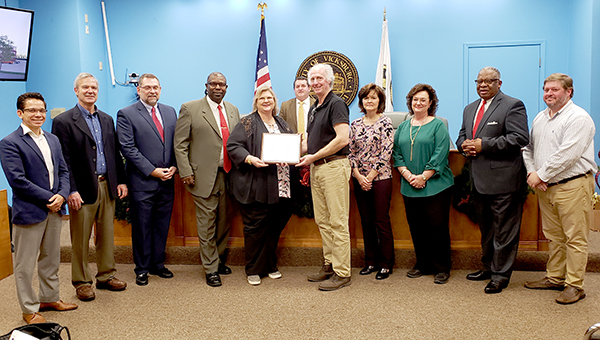 The city of Vicksburg was recognized for its efforts involving the development of the Mississippi Center for Innovation and Tech Transfer at Monday’s meeting of the Board of Mayor and Aldermen.

The award from the National Association of Development Organizations was presented to the board by Mike Monk, director of the Central Mississippi Planning and Development District. The CMPDD received the award, known as the Aliceann Wohlbruck Impact Award, at the NADO annual training conference in Reno, Nev.

It recognizes work done by regional development agencies and partners like Vicksburg to improve an area’s economy and increase its ability to be more competitive in the economic development market.

The city was recognized for its project to pave and expand the parking lot of the former Mississippi Hardware Building, which is being converted into the Mississippi Center for Innovation and Tech Transfer.

The parking lot project was funded in part by a $545,000 Delta Regional Authority grant. Central Mississippi Planning assisted the city with getting the grant.

“I’m very pleased to present this award to the city,” CMPDD Director Mike Monk said. He said the project was one of the few in the country to receive the award.

“They’re the ones who stayed on top of it,” he said. “They are the ones to take credit. It (the project) was a challenge, but at the same time, we knew it was important.”

The Mississippi Center for Innovation and Tech Transfer is a $19 million project influenced by the presence of the U.S. Army Corps of Engineers and the Army’s Engineering Research and Development Center in Vicksburg.

The center’s development is expected to create a space to attract small and middle-sized businesses that could potentially work in federal-type programs.

The Mississippi Hardware building closed in October 2013, and its future use was a topic of speculation, including the possibility the building would be converted into a hotel to serve the Vicksburg Convention Center, which is on the west side of Mulberry Street across from the building.

Mississippi Hardware was known as an outlet for hard-to-find tools, and the building was the store’s third location since its establishment in 1935.