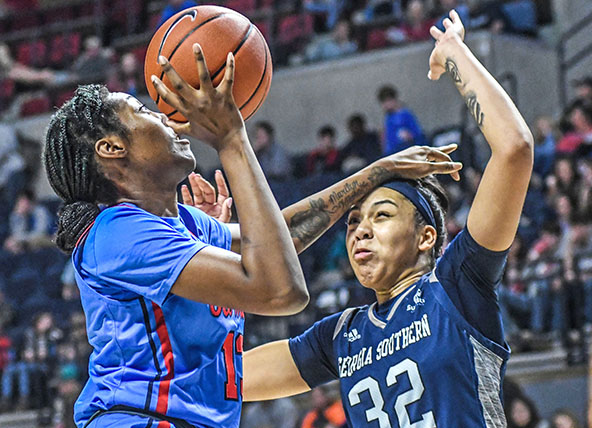 OXFORD — Monday afternoon at The Pavilion was a bit more high-pitched than a standard Ole Miss basketball game.

Schools, mostly elementary and middle, from Batesville to Pontotoc came by the busload to watch the Ole Miss women’s basketball team beat Georgia Southern 69-66 in overtime.

In total, the team had 6,574 in attendance on Monday, mostly students. Ole Miss officials said they had reservations for more than 8,000, but had some day-of cancellations due to weather concerns.

“It’s the best day ever. I told our players they had a responsibility to be a positive example today and play the game the right way for these kids,” Ole Miss coach Yolett McPhee-McCuin said. “Not only just the girls, but boys too. I just think sports have a way of teaching respect, no matter the race or the gender. It was pretty cool to see them come out and cheer. I hate that we had to go overtime, because they had to leave. Wish they would’ve been able to stay to the end.”

On the court, McPhee-McCuin admits this Rebels team is still putting the pieces together and learning how to win. Monday afternoon’s game goes a long way in that regard.

A back-and-forth game marked by a handful of key runs by both teams, Ole Miss took a 30-26 lead into halftime. Coming out of the break, Georgia Southern was able to retake the lead with a 10-0 run of its own, before the final portion of the third quarter was characterized by four lead changes and a stretch of tied basketball.

In total, it was the most back-and-forth game Ole Miss has played all year, featuring 10 lead changes and four ties.

Georgia Southern claimed the lead with 7:33 remaining in the fourth quarter off of two intentional foul free throws. Unlike the third quarter, when the lead bounced around, Ole Miss immediately went on an 11-3 run once it fell behind.

Leading by as many as eight points late, Ole Miss nearly let the game get away. A Georgia Southern and-one and subsequent layup cut the lead to 59-58 with 1:13 to play. An Eagle layup off an offensive rebound with 23.7 seconds to play tied it at 60-60. The game went to overtime tied at such.

Ole Miss scored the first six points in overtime to seal the 69-66 win. Mimi Reid made a basket and two free throws to push it to 66-60 with 50 seconds remaining. Georgia Southern got back with 69-66 and had a chance to tie after Reid missed two free throws with eight seconds left, but it never got a final shot off.

“I thought we handled adversity well,” McPhee-McCuin said. “This game is huge. It doesn’t matter the opponent right now … we responded in the right way. There was never a moment for me that I felt like we wouldn’t win this game.”

Espinoza-Hunter banked in a running 3-pointer just before the halftime buzzer for a 30-25 lead, and the Bulldogs held Louisiana-Lafayette to 23 points in the second half to keep alive the nation’s longest active road win streak. They also snapped a two-game losing streak.

The Bulldogs entered after an eight-day break that followed a home loss to West Virginia. They shot just 41 percent and committed 25 turnovers, but held ULL to 16-of-51 shooting.
Mississippi State shot 58 percent from the floor in the third quarter to take a 10-point lead, 46-36, into the final period.

The Ragin’ Cajuns lost last year’s meeting 104-36 on the road and is winless in the series’ 12 games.

“We did not shoot it well. We have a pretty good shooting team. We did not shoot it well. Field goal percentage wise there was going to be a bunch of rebounds.” Mississippi State coach Vic Schaefer said. “I thought (Danberry and Bibby) rebounded the ball extremely well. We certainly needed that. Jo had a double-double. I am proud of her for that.”