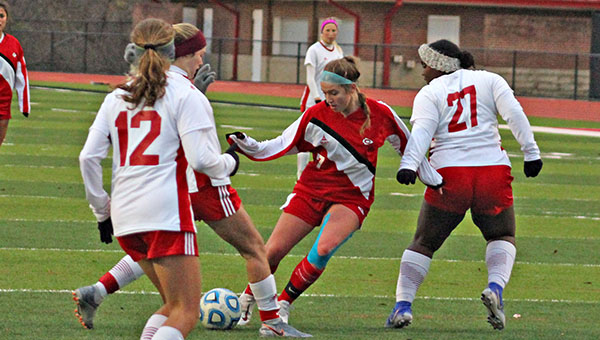 Clinton’s Kaci Craft (7) tries to get through Warren Central’s Jayda Griffin (27) and another defender in the first half Tuesday. Craft scored three goals to lead Clinton to a 7-0 win over the Lady Vikes. (Ernest Bowker/The Vicksburg Post)

CLINTON — A cold, hard wind blew straight down the pitch at Clinton’s Arrow Field on Tuesday afternoon. It brought with it ill will and too many goals for the Warren Central Lady Vikes to handle.

Kaci Craft scored three goals in the first half, Jada Jelks put two in in the opening minutes of the second, and Clinton crushed Warren Central 7-0 in a pivotal Region 4-6A girls soccer match.

“It’s embarrassing. We’re not that bad of a team. (Clinton) barely beat Northwest Rankin and we stood toe-to-toe with Northwest Rankin. I don’t know if it was the extreme cold or what, but we came out like we didn’t want to win this game,” Warren Central coach Greg Head said. “We didn’t play our game. Nobody did.”

Warren Central has now lost to both of its main competitors in the region, Clinton and Madison Central. It would likely not only need to beat both of them when they play again in January, but by at least three goals apiece to pull even on the aggregate score that serves as the first tiebreaker.

There is a three-goal limit on the tiebreaker. So even though Clinton won Tuesday’s game by seven, Warren Central could tie by winning the Jan. 14 rematch by three or more goals.

“That’s going to really put us in a bind with the playoffs, because it’s a hard job to come back after seven. The only thing we can hope to do is beat Madison Central now. Even if we beat Clinton, that’s hard to break against a team like that where we didn’t have many shots,” Head said. “When you’ve got Madison Central and Clinton in the same bracket, we’ve got to hold it close. After those four goals we tried to move some people around and it didn’t help.”

Warren Central might be capable of beating Clinton with a better effort, but judging by the one it turned in on Tuesday there is a wide gap between the teams.

Clinton outshot the Lady Vikes 23-0 in a game that was shortened to 57 minutes because of the mercy rule. Nearly all of the first half and all but a couple of minutes of the second were played on Warren Central’s side of the field.

The game was scoreless until the 16th minute, and then the floodgates opened for Clinton.
Warren Central was called for a handball inside the goal box on a corner kick, leading to a penalty kick that Craft converted for the game’s first goal. She added another following a brief scrum in front of the net in the 25th minute, and completed her hat trick in the 34th.

Acacia Rodriguez had another goal, on a pretty 25-yard shot that curled past WC keeper Anna Hoben into the upper right corner of the net, as they took a 4-0 lead into halftime.

Jelks scored twice in the first six minutes of the second half, and Tailyn Remmel finished things off with a goal in the 57th minute.

Hoben made 12 saves for the Lady Vikes, but struggled against relentless pressure right in front of the net. Five of Clinton’s seven goals came from shots inside the box.

“After that third or fourth goal, even though all of them were stoppable, we’re not pressuring inside the 18 and they’re going to score on you,” Head said. “Anna can only save so many. If you don’t high-pressure them, they’re going to eat your lunch. Which they did.”
In the boys’ game, Clinton beat Warren central 7-2.