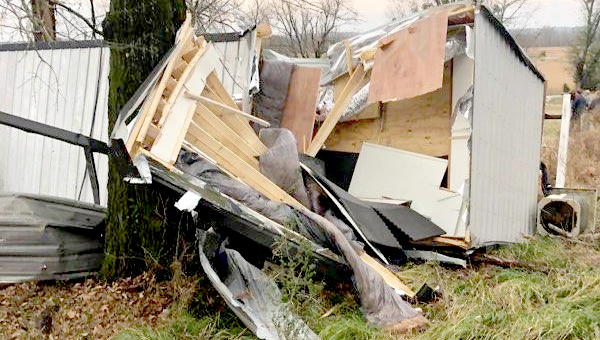 Residents in Edwards were cleaning up and assessing the damage in the wake of a reported tornado that hit the town Monday morning.

Edwards was one of several areas in Mississippi affected by reported tornadoes and high winds as a line of severe thunderstorms ahead of a cold front moved through the state Monday.

A spokesperson for the National Weather Service Office in Jackson said survey crews were out in the affected areas doing assessments.

Edwards Police Chief Terrance Crump said the storm damaged several homes and cars, “But the majority of the damage was to the power lines, and a lot of trees were across the roadway.” There were no injuries, he said.

He said most of the damage occurred in the Ascot and Royal Street subdivisions, where homes were damaged.

“We have some houses that are a complete loss and some that can be repaired,” he said. “We have several vehicles that are totaled out. A tree fell across them.”

Crump said about 90 percent of the town was without lights, and telephones at the police department and City Hall were out of service.

In Warren County, Emergency Management director John Elfer said structures at the Magnolia Hunting Camp on the Big Black River off U.S. 61 South were the only ones with storm damage reported in the county.

“Three or four trailers were damaged with trees on top of them and one was twisted,” he said. “We got lucky.”

During the storms, Elfer said, his office received a number of telephone calls from people wanting to know what was going on with the weather.

“I can’t emphasize enough how people need to have not only systems to warn them about watches and warnings, but they need some way, whether it be a television or computer or smartphone, to be able to keep up with what is going on,” he said.

“They need to be able to pull up a radar and understand what they’re looking at. If people have questions about that, they can certainly call us.”

In other areas of the state, three people were injured, at least one of them very seriously, by an apparent tornado that hit Amite County Monday afternoon, county emergency director Grant McCurley said.

Some houses were destroyed and others severely damaged, he said. The number wasn’t known Monday night because crews couldn’t get to them all — downed trees tangled with power lines blocked county roads and state highways.

The damage was spread across the county, which adjoins the southeast Louisiana state line, McCurley said.

In Guntown, near Tupelo and about 260 miles north-northeast of Amite County, an apparent tornado destroyed a church and damaged dozens of homes.

Pastor Carl Estes searched through the debris of Lighthouse Baptist Church for books, photos or any other salvageable items, the Northeast Mississippi Daily Journal reported. The storm flattened the building, which Estes said was empty at the time.

Church member Shane Keith told the newspaper he rushed here after the storm and found pews tossed around the hillside.

“I wanted to cry, I really did,” Keith said. “I mean, I just got baptized last year and this means a lot to me, this place right here.”