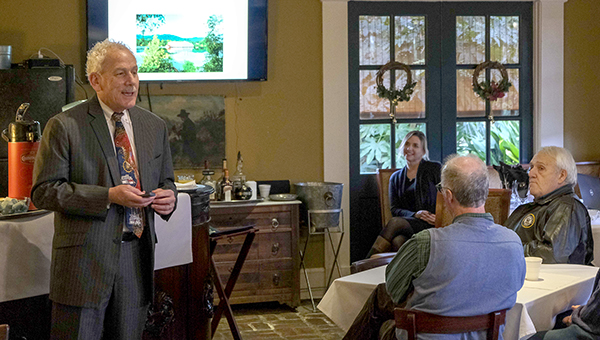 Speaking to local tourism officials and business owners, Jim Palmeri with Shore Excursions of America, said a total of 16,537 people traveling on the two boats visited Vicksburg during stops at the city and spent an average of $76 inside the city, adding the company has pumped $2.26 million into the area’s economy.

That money, he said, helped support 174 tourism-related jobs in the area.

Palmeri was part of a team of American Queen officials, including company founder John Waggoner who discussed the company’s future plans and to renew its relationships with city and area tourism officials.

“We are the largest operator on the Mississippi River; we carry more passengers than anybody else will,” he said.

He said the Queen’s sister boat, the American Duchess accommodates 166, and the company expects to have a third boat, the 248-passenger American Countess, which will be christened in April.

He said the boat is being built in Houma, La.

“I think we help a little bit in creating exposure for all the cities along the river,” Palmeri said, adding when prospective travelers see information on the company’s website, they want to find out more about Vicksburg, which leads them to websites like Visit Vicksburg.

“Thirty percent of a person’s cruise is on land,” he said. “Being on land is so important, and the experience on the boat transfers over to the shore. We talk about culturally and educationally enriching; they want to know about America.”

Palmeri complimented the city’s tour guides for their work in making the passengers’ experience enjoyable in Vicksburg.

The Academy of Innovation’s Innovation Choir held its annual winter concert Tuesday at the Church of the Holy Trinity. The... read more