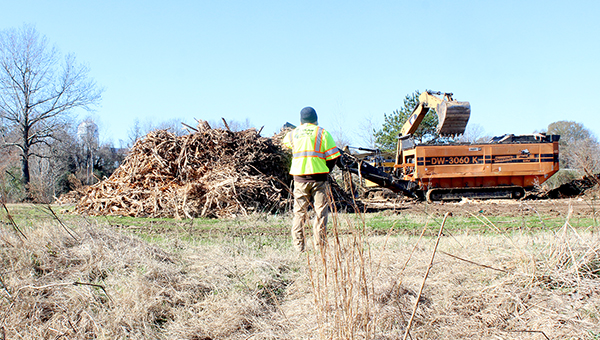 Heavy equipment for T.L. Wallace Construction Co. removes and shreds trees taken down during excavation to prepare land on the east side of South Frontage Road for an overpass as a Mississippi Department of Transportation observer looks on. The overpass over the Kansas City Southern Railroad tracks will link the west and east sides of North Frontage Road providing direct access to the Outlets at Vicksburg and hotels and restaurants on East Clay Street. (John Surratt/The Vicksburg Post)

Once the project is completed, drivers using South Frontage Road to reach the businesses, restaurants and hotels on the road’s east side will take a slight jog to the west to cross the Kansas City Southern Railroad tracks.

The project to link the east and west sides of South Frontage Road involves building an overpass crossing the railroad tracks, and equipment and crews for contractor T.L. Wallace of Columbia are excavating the site for the overpass just to the west of the road. That means a slight shift in the road to get to the bridge.

“There will be a minor realignment of the road to meet with the overpass,” Mississippi Department of Transportation spokesman Mike Flood said.

The overpass will be built west of the South Frontage Road-Old Mississippi 27 intersection.

Work on the extension project began in November, and property between the railroad tracks and the eastern end of South Frontage Road has been cleared and dug out in preparation for the overpass.

The Mississippi Transportation Commission in September awarded the project to T.L. Wallace, which submitted the low bid of $17.33 million for the project. The bid was more than $450,000 under the project’s estimate of $17.80 million.