Inaugural Christmas in the Park coming to a tremendously successful close 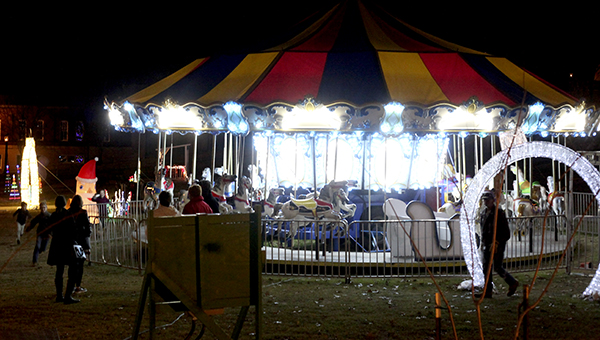 The carousel and Christmas decorations light up Washington Street Park Wednesday night in downtown Vicksburg. The inaugural Christmas in the Park will come to a close Saturday evening. (Courtland Wells/The Vicksburg Post)

Christmas in the Park will come to a close Saturday, but not without an overwhelming show of support from the community.

According to Vicksburg Main Street Executive Director Kim Hopkins, the weeks-long event has drawn thousands to the park and to downtown Vicksburg.

“We don’t have an exact headcount, but we know several thousand people have visited the park,” Hopkins said.

In addition, she said, nine daycare centers came out during the special hours set aside for school groups as well as tourists.

Sponsored by Vicksburg Main Street, Billy Sheffield, Sheffield Carriage Company, the city of Vicksburg and the Vicksburg Convention and Visitors Bureau, Christmas in the Park included live entertainment and visits from Santa and Mrs. Claus. It also featured carousel and trolley rides.

Hopkins said the money raised from selling tickets to ride the carousel and trolley, along with sales of concessions, “will go back into a fund to hopefully continue Christmas in the Park for next year.” She said as of Wednesday, more than $5,000 had been raised.

She said the total expense for the inaugural event is between $26-27,000 with Main Street funding supplies, decorations and the tree. The city of Vicksburg contributed to the cost of the carousel.

It has not yet been determined whether Christmas in the Park will return next year, but as far as feedback from the public, Hopkins said, it has all been positive.

“From the general public, we have had a lot of people tell us they would like to continue it and how much they have enjoyed it and that it has been a wonderful event,” Hopkins said. “We have also had people come up to us and say they would like to help next year and help sponsor it.

“I was very pleased and excited about that.”

In addition to this year’s sponsors, Hopkins said Kendra Reed from the McRaven House donated some of the decorations and the snow machine, and churches and groups came out to perform.

“We also could not have done this if the city crews had not been there to help,” she said.

Hopkins said she has been pleased with the turnout and success of Christmas in the Park.

“I really think it has been wonderful and given people a new family tradition,” she said. “We had cotillion members come down and take pictures with all of our decorations, and we even had a wedding party come down. It has made my heart full to see all the joy that we are bringing.”

Santa Claus will be on sight Saturday from 6 to 9 p.m.