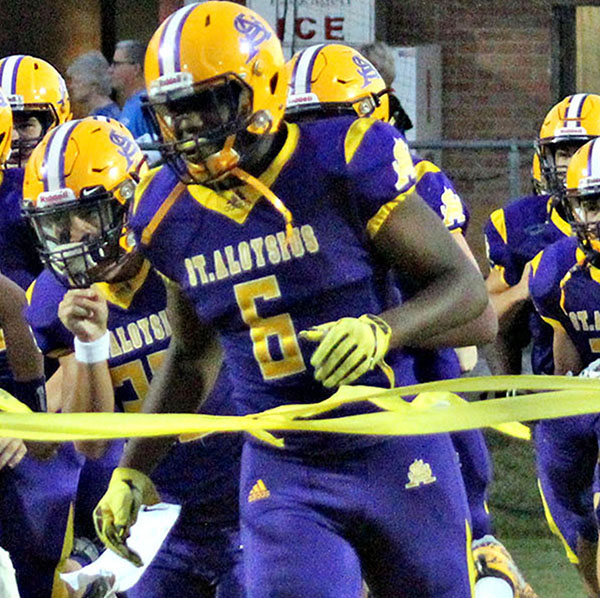 St. Aloysius linebacker Michael Robinson (6) leads his team onto the field for a game against Copiah Academy. Robinson was selected to the MAIS All-Class 5A team on Wednesday. (Ernest Bowker/The Vicksburg Post)

After two seasons of terrorizing opposing offenses, Michael Robinson has earned a spot among the best high school football players in the Mid-South Association of Independent Schools.

The St. Aloysius senior linebacker was named to the All-MAIS Class 5A team on Wednesday to cap a stellar high school career. Robinson finished this season with a team-high 86 tackles and seven fumble recoveries, and caught nine passes for 131 yards while playing tight end.

He also led the Flashes with 96 tackles in 2018, and was selected to the MAIS All-Star Game this season.

“It makes me feel real good to be recognized at such a high level. I was hoping for it,” Robinson said. “I worked harder this year just so I could keep progressing and become a better player overall. I’m still kind of speechless about it.”

Eight-man champion Briarfield Academy dominated the All-Class 1A team, landing five players on the list plus both the offensive and defensive players of the year. Head coach Beau Travis is the Class 1A coach of the year after leading the Rebels to a 12-1 record and their second MAIS championship in three years.

Junior quarterback T.J. Baker is the Class 1A Offensive Player of the Year. He threw for 1,631 yards and 31 touchdowns, with only five interceptions in 166 attempts. Baker ran for 2,087 yards and 33 touchdowns, averaging 13.0 yards per carry and 286 yards of total offense per game. He also had 100 tackles and 11 interceptions as a defensive back.

Junior linebacker Crews Fortenberry is the Class 1A Defensive Player of the Year. He finished the season with 148 tackles — including 21 for loss — two sacks and four forced fumbles. On offense, he ran for 642 yards and nine touchdowns and caught 17 passes for 275 yards and three TDs.

The Trojans finished 9-2 and lost to Briarfield in the semifinal round of the playoffs.