A treasured tradition of pies, ornaments and giving 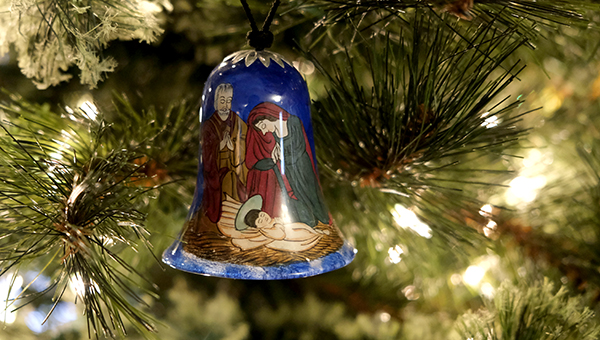 This bell ornament was one of the many sent to Lucy Coleman from Anthony Cuozzo over the years. (Courtland Wells/The Vicksburg Post)

Although it reads like a Hallmark movie, the friendship between Lucy Coleman and Anthony Cuozzo is not a made for television show.

For years, the unlikely pair exchanged Christmas gifts, and it all started with a homemade pecan pie.

“Many years ago, I’m thinking it was in the 1980s, my mom met a gentleman through her job at LeTourneau,” Coleman’s son Mike Robinson said. “I believe at that time, he (Cuozzo) worked in the LeTourneau corporate office.”

Coleman had been a payroll and time clerk during her tenure at the local shipyard.

It was during these visits, Robinson said, Cuozzo was introduced to his mother’s baking and canning abilities.

“She would take pies and various goodies to work when they had special guests,” Robinson said.

After learning Cuozzo, who was from Connecticut, was a fan of her cooking, she one year sent him a pecan pie and in return, he sent her an ornament.

For years the Christmas exchange continued with her sending goodies, jelly, pies or something of the sort, and him sending an ornament.

And the ornaments were not ordinary ornaments, Robinson said.

“They were beautiful unique ornaments such as Christopher Radko, Lenox, Simon Pearce and The Stuart Collection,” he said.

“I called to let Anthony know so that he wouldn’t unknowingly send an ornament at Christmas,” Robinson said. “We thanked him for his generous exchange with my mother and let him know that we had inherited the collection of ornaments and would always cherish them and the memory of the joy it brought my mom each Christmas.”

But to Robinson’s surprise, Cuozzo wanted to continue sending ornaments.

Robinson said he does not recall his mother receiving and opening any of the ornaments Cuozzo sent her, but when he and his family visited for the holidays, she would show off her collection.

“She treasured them and took great care to store them in their original boxes with the gift cards that came with each one,” Robinson said. “These ornaments were kept separate from her dime a dozen ornaments.”

Robinson said his mother loved each of the ornaments and was not sure if she had had a favorite, but if she had, he thought it would have been the Nativity painted bell.

“She loved and collected bells,” he said.

This year, Robinson said, will mark the 20th year of his exchange with a man he has never met.

“These ornaments will be family heirlooms to remind my children of my mother’s kindness and the relationships she made,” Robinson said. “My mother was a simple southern woman with modest means while Mr. Cuozzo is a northern, white-collar corporate worker. These differences didn’t keep them from forging a friendship that has carried on even beyond her lifetime. We could all stand to learn from their example.”