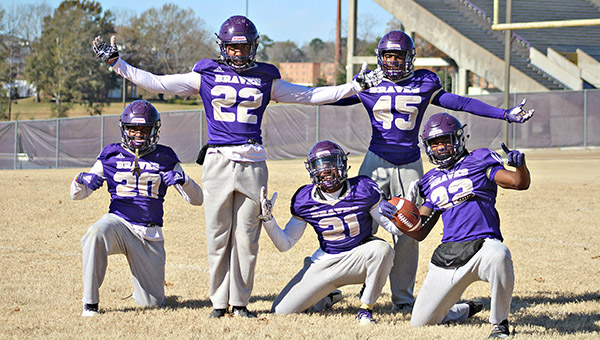 Alcorn State has created a dynasty in the Southwestern Athletic Conference.

Only one thing is missing — a national championship.

The Braves won the HBCU national title in 2014, when it was awarded through a media poll. They have been thwarted three times since the issue started getting settled on the field, but now has another chance to break through.

Alcorn State (9-3) will take on North Carolina A&T (8-3) Saturday in Atlanta in the Celebration Bowl, the national championship game for historically black colleges and universities.

“It’s going to be a hard-fought ballgame. I think (North Carolina A&T coach Sam Washington) has done a phenomenal job with the Aggies to get back here again, so I told the players we have unfinished business,” Alcorn head coach Fred McNair said. “We just need to come out and play hard and do the right things that win ballgames. And that’s executing and playing fast to the football.”

The Celebration Bowl pits the champions of the SWAC and MEAC, the two HBCU conferences in the Football Championship Subdivision. This is the third time in the bowl’s brief five-year history that Alcorn and North Carolina A&T have played.

“It means the world. I’m just so proud of these kids and the effort and time they put in, and their willingness to take direction. What it takes to be a champion,” North Carolina A&T coach Sam Washington said. “It’s not easy. It’s very tough, matter of fact. To do it consistently takes a lot of effort and want-to.”

This Celebration Bowl could be a battle of air vs. ground.

North Carolina A&T ranks 11th in the FCS in rushing yardage as a team, and running back Jah-Maine Martin is sixth individually. Martin has run for 1,336 yards in 11 games and on just 171 attempts, a 7.8 average per carry. He’s also scored 21 touchdowns.

Alcorn, meanwhile, is led by quarterback Felix Harper. The SWAC Offensive Player of the Year has thrown for 2,613 yards, 30 touchdowns and just eight interceptions this season. He ranks sixth in the FCS in passing efficiency with a 163.9 rating.

Harper took over as the starter after senior Noah Johnson, the SWAC Preseason Offensive Player of the Year, went down with an injury in the third game at McNeese State. Harper is one of four finalists for the HBCU Player of the Year award.

“This will be his first time starting a bowl game and he’s done a great job throughout this whole season. He’s fought through adversity and has played the game the way it’s supposed to be played,” McNair said of Harper. “He’s been very humble, nothing ever bothers him and he leads by example. This game will be a homecoming for him since he’s from Georgia. It’s going to be a hard-fought ballgame and we’ll need to execute and play at a high level.”

This is the highest level for the two HBCU powers. Besides two dynasties going head to head, it’s a rare opportunity to do it on a national stage.

The game will be televised on ABC and kick off a full day of college bowl games. McNair said it’s a showcase for the schools, their conferences and HBCUs as a whole.

“It means a lot. The school gets so much recognition just by coming here with all the publicity and the nationally televised game. Alcorn will receive so much just by playing in this ballgame and it has a lot of effects,” McNair said. “It helps with recruiting and helps the university with enrollment numbers. It’s a recruiting tool for both the school and the football team. It also means a lot to the players — this is where they want to be, on a big stage like this. So, it means a lot to everyone.”