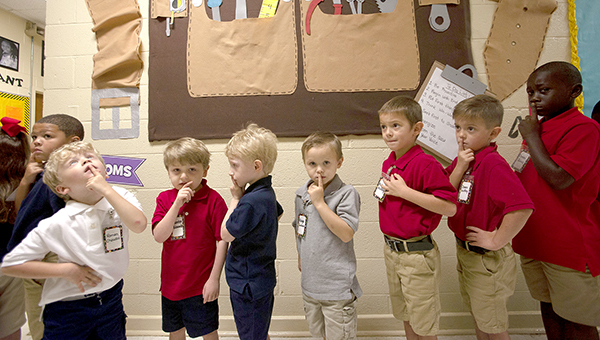 Students stand in a line while walking the hallways of Bovina Elementary during the first day of school in August. (Courtland Wells/The Vicksburg Post)

For the second year in a row, Bovina Elementary School has earned special recognition from Franklin Covey, the creator of the Leader In Me initiative.

The Lighthouse Academic Honor Roll award recognizes Leader in Me Schools that have both met the requirements necessary to achieve and maintain Lighthouse School Certification and shown “exemplary academic growth or proficiency as measured by state accountability standards.”

The recognition was announced Friday by the Vicksburg Warren School District.

According to the release, academic distinction is determined through the data analysis of an independent nonprofit website. The site’s algorithm scores on a percentile ranking, comparing like schools across the state.

To meet the academic growth standard, the school must be at or above the 50th percentile and have shown a 5 percent growth from the previous year’s percentile ranking.

“We are proud of the work that is happening in the district. Learning and practicing the Seven Habits will serve our students now and for the rest of their lives. They will leave us well-prepared for college, career and life,” Vicksburg Warren School District Superintendent Chad Shealy said. “ I congratulate the staff, students and parents at Bovina for this impressive achievement. Being recognized two years in a row is outstanding and quite an accomplishment.”

In the letter, Covey said schools like Bovina Elementary “serve as exemplars for Leader in Me Schools throughout the world.” and he thanked them for their “continued excellence as a beacon for Leader in Me schools!” Also included in the letter was a decal that can be affixed to the school’s Lighthouse banner marking the achievement.

The Leader In Me initiative is an evidence-based, comprehensive school improvement model that empowers students with the leadership and life-skills they need to thrive in the 21st century.

Bovina Elementary School began the initiative in 2012 and achieved Lighthouse status in 2015.

There are four Lighthouse Schools in the state of Mississippi and all are in the Vicksburg Warren School District: Academy of Innovation, Bovina Elementary, Bowmar Avenue Elementary and Redwood Elementary.

The Leader In Me initiative in Warren County began through a partnership with the Vicksburg Warren Chamber of Commerce in 2012 and is now in all 16 schools (pre-K through 12th grade) within the District. Several other schools in the district are considering applying for Lighthouse status in the future.