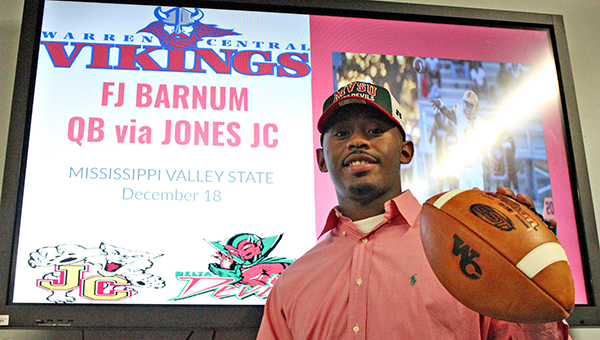 If there’s one thing Fred Barnum, Jr. has learned over the course of his football career, it’s how to make the most of an opportunity.

He only got one season as Warren Central’s starting quarterback and won The Vicksburg Post’s Player of the Year award and earned a junior college scholarship. At Jones College he again had only one season as the starter and thrived, turning that opportunity into a four-year scholarship.

Barnum signed with Mississippi Valley State on Wednesday, during college football’s early signing period. Earning a Division I scholarship was a satisfying step in a career built off of seizing opportunities wherever he finds them.

“From being a one-year starter my senior year here (at Warren Central), and then going to JUCO and getting another one year as a starter, it’s been a long process. I’m glad it’s finally here,” Barnum said at a signing ceremony in Warren Central’s fieldhouse Wednesday evening. “When you’re not getting a chance to start, you have to take advantage of every opportunity you get. Having done that is just making everything a lot easier.”

Barnum was the 2017 Vicksburg Post Player of the Year at Warren Central, when he threw for 1,600 yards and 10 touchdowns and ran for 620 yards and three TDs. All of it was after he patiently waited his turn, for two years, as the backup.

Barnum signed with Jones and, again, waited his turn to start. He played in 11 games in 2018 but was the clear No. 2 behind Stetson Bennett. Barnum only threw 57 passes that season, and in only three games did he have more than seven attempts.

This season he was the starter and he again helped Jones reach the state playoffs and a top-10 national ranking. He completed 56.6 percent of his passes for 1,342 yards, with 11 touchdowns and eight interceptions.

“It’s been a fun experience. I’ve been able to play for the state championship, and then gone to the playoffs again in a very hard JUCO league in Mississippi,” Barnum said.

Early this season, he said, Mississippi Valley State started recruiting him — as well as a number of his teammates. Five Jones College players signed with Valley on Wednesday, including Barnum and Vicksburg High alum Roderick Hicks. Hicks is a defensive back. 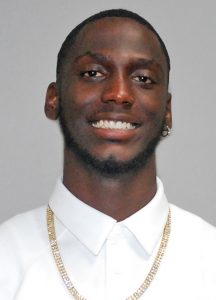 Hicks had 27 tackles and two pass breakups this season. Rankin caught 11 passes for 130 yards and one touchdown.

“I started talking to the offensive coordinator, Coach (Jared) Powers, in the early part of the season. Coach (Derek) Welch, the defensive coordinator, started recruiting me harder and that was it. I felt welcomed. All of the coaches were showing love and it felt like home. And I have the opportunity to go in and compete for a starting job,” Barnum said.

Mississippi Valley State finished 2-9 last season and has not had a winning record since 2006. The last time it won more than two games in a season was 2012, when it finished 5-6. Valley is also the only team in the Southwestern Athletic Conference that has not played in the conference’s championship game since it was started in 1999.

None of that discouraged Barnum.

“With the guys that we signed today, I feel like we can turn the program around,” he said. “Different recruiting classes give you different opportunities at the end. You can’t turn down a Division I offer.”

It also helps that, for once, he might not have to sit and wait. The Delta Devils’ starting quarterback in 2019, Dejerric Bryant, is graduating and there isn’t a clear-cut successor. The current backup, rising senior Roger Totten, only attempted 39 passes in seven games last season. Two other QBs are underclassmen.

Barnum said that after traveling a long, hard road to reach this point he’s fired up about getting his opportunity — and ready to seize it, just like he’s always done.