Holland: New Board of Supervisors must focus on economic development 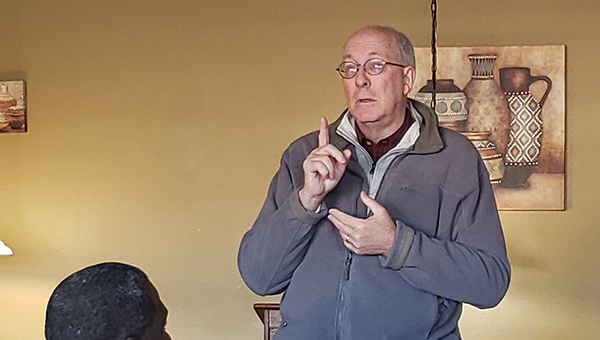 District 4 Warren County Supervisor Jeff Holland discussed the challenges faced by the incoming Board of Supervisors at a meeting of the Port City Kiwanis Club Thursday. (John Surratt/The Vicksburg Post)

Holland is one of the four new supervisors elected in the November general election, which saw voters replace all but one of the county’s then-sitting supervisors.

“Our system is still designed around roads and bridges,” he told members of the Port City Kiwanis Club. “Our county engineer is wired to the concept of taking care of bridges and roads.

He said he was not criticizing previous boards.

“We’re not trying to contrast ourselves with the old board,” he said. “The old board did some things very well, that’s not what we’re trying to do.”

But beginning immediately, Holland said, “Economic development, in my mind, should be the activity of the day for the supervisors. It is a thing we’re involved in every day.”

The county, he said, should be run as a business, adding when he was the director of the U.S. Army Engineer Research and Development Center, “I learned every day at ERDC that ERDC, although a federal agency, was a business.

“We have customers and those customers have to choose whether to come to ERDC or not. The funds ERDC has are funds that ERDC has to compete for, has to bargain and develop for. That organization learns to market with all the different federal agencies that it works for every year — year after year.”

And if the basic concepts of running a business are applied to county government, “While they don’t exactly translate, they come real close,” he said.

“We’ve got to be open to ideas that if you start at the top of what we’re doing here, what we really want in our community is we want to grow in a meaningful way,” he said. “We need people to take good quality jobs in our community and we want them to live here.”

To have businesses come to Warren County and bring their employees, Holland said, “We’re going to have to have something that outcompetes other areas in the south and certainly in the state of Mississippi that will cause them to want to locate here.”

And that means meeting the housing needs of employees.

Younger people, Holland said, are looking at something different in housing.

“They’re not necessarily looking for single-family dwellings. They would be happy to live downtown, if there were more places to live downtown, as their starter homes,” he said. “We’ve got to balance that need and the fact that we still have people coming from other places who need to buy homes up and down the scale. In our case, we need homes in the $150,000 to $250,000 range, and we don’t have a lot of them.”

Housing, a good school system and a quality environment are tied to the need to have people move into and live in the area, he said.

“We made a massive investment in our school system,” Holland said, referring to the 68-mills property tax that funds Vicksburg Warren School District operations and its $131.5 million capital improvements program.

“That investment puts us in a position where you go look at the other 15 places in the state that are comparable to us that Vicksburg can benchmark against.”

Holland said the new board faces some challenges. One is building a new county jail. Another is hiring a new county administrator to replace John Smith, who recently retired.

“He was the glue of this county for an awfully long time,” he said. “He had good people behind him, but his loss affects them, also.”

Holland said the new supervisors have been meeting with one another and discussing how to handle the issues they will face once they take office.

Government, economic development, infrastructure and education, he said, all have to be able to work together if the county is to grow and prosper.

“We need to work together to integrate all of them,” he said. “We can do that; this group has experience.”